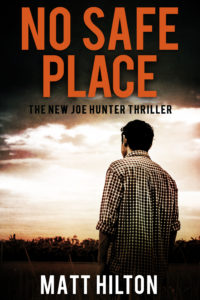 Who does Andrew Clayton turn to for help when his wife has been murdered, his child is in danger, and the police think he is responsible?

Despite his mistrust of Clayton, Joe Hunter accepts the job of protecting young Cole. But who is he protecting the boy from? And why?

It’s clear Clayton knows more about his wife’s killer, but he isn’t saying. And when his silence places Cole in the killer’s sights there’s…No Safe Place.

I received a copy of this book from the author in exchange for a honest review.

Well OMFG #bookjunkies!!   Every now and again, as a reader, I am lucky enough to be told about or come across an author whose books I have not read before.  Matt Hilton is one such author.  And although No Safe Place is Book 11 in the Joe Hunter series, it can easily be read and enjoyed as a stand-alone. I am now totally #HookedOnHunter and will be adding this series to my TBR!!

Set in Florida, the book really does pull you in from the start with a prologue that kept me turning the pages and wanting to know more! Questions were popping into my head a mile a minute as the story unfolded and aspects of the plot were revealed.  The build up to the OMG moments started evenly but once the momentum got going, I just could not put this book down! Justice, retribution, a wee bit of love and the bond of friendship could be found interwoven in the story-line.

I am a character person.  When I read a book, I need to feel some sort of connection with the characters more than anything else or I lose interest quickly.  There was no problem on that front!  Joe Hunter is a likeable rogue of sorts.  A #BadBoy with a good heart.  He is British and it is evident throughout that he has not lost this as his phrases are often poked fun at by those around him.  Hunter uses  gut instinct combined with logic to get the case solved.  His “side-kick” of sorts is Rink and there is great banter between these two.  Rink runs an investigation agency and they team up with the police to solve this case.  Detective Bryony Van Melor and Detective Dennis Holker have differing views on Hunter – though both know that in the end, Hunter will be an asset in solving the case– even if his methods are unorthodox.  I loved the relationship between Bryony and Hunter and actually look forward to going back through the series to see where it all started.

For me, a good action thriller has to have those elements which make the scenes believable while still making you gasp in anticipation about what might be around the corner.  Lee Child and Tom Clancy do an amazing job of this — but Matt Hilton can also be classed in that crew as the description(s) of the action scenes were phenomenal!  Being a visual reader, I thoroughly enjoyed the way the author delivered the action in this story.  So much so, at times I felt I was actually a part of it all —  every time a kick was landed, a punch thrown, a bullet dodged — I felt that I was right in the moment  — I became a wee bit #badass and the buzz  was immense.  Hats off to the author for delivering as it is not easy, but Matt Hilton certainly did not disappoint!

I also loved the humour and banter that was woven throughout the pages.  It really brought both the characters and the story to life and made me want to know more.  Matt Hilton has a distinct style of writing and this is one author who I will definitely be reading again and again.

So #bookjunkies, in case it was not obvious, as a #NewAuthorForMe I was more than pleased to have been introduced to the Joe Hunter series and feel a little bit smug if I am honest.  You see, fans of Joe Hunter, will already know what a great series this is — I get to experience it from the start — and that just rocks!  I highly recommend you check this author out and grab yourself a copy of No Safe Place!  You will not be sorry and can join me on the journey as a #JoeHunter newbie!  Don’t go just yet though– scroll down and read the fabulous Guest Author post — it is well worth it! 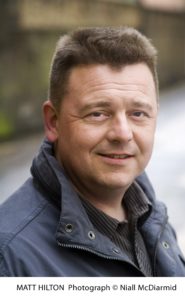 It’s a really nice feeling to be asked to do a guest blog, so first off I would like to thank Noelle at CrimeBookJunkie for having me.

For those of you unfamiliar with my books, or me I’ll give you a potted history of my writing career to date. I’m often asked if Matt Hilton is my actual name. It is. Well, actually my first name is Matthew, but I only ever hear it called when my wife is angry with me. Also, I’m also often asked if I’m related to Paris Hilton. The answer is no, although I did stay in one of her family’s hotels once – as a paying guest. I’m from Cumbria, in the grey north of England, although I am a Scot by birth. I grew up on a council estate in Carlisle with four brothers, and later a little sister. Back then things were tough and we all were encouraged to follow inexpensive pursuits and and hobbies like reading and drawing, which we all took to. An early ambition of mine was to make stop motion animated movies, and I recall drawing out storyboards on old rolls of woodchip wallpaper. Alas, I never got to follow that dream, but through the plotting of my movies I got the bug to write. I wrote my first novel (and I say that with a hefty pinch of salt on a tongue firmly wedged in my cheek) at about 11-13 years of age. It was a coming of age story very much inspired by the books of SE Hinton. After that I began writing in earnest, and in those days was emulating the kind of books I enjoyed reading, primarily heroic fantasy (Conan the Cimmerian being my favourite) or action adventure (Mack Bolan, Remo Williams) and westerns (Edge, Adam Steele) etc. Later I discovered American thrillers, and from there they led me into reading crime fiction and action thrillers, and with my reading habits my writing habits also adapted.
I tried for many years to get published, but apart from a few articles in martial arts magazines, and a few near misses in national competitions and even once getting close with a traditional publisher, I had no luck until I was in my early forties. I was 42 when I finally interested an agent and publisher with the first of my Joe Hunter thrillers, Dead Men’s Dust, from which I grabbed at a five-book deal with Hodder and Staughton. So, my sudden overnight success took many decades to reach. The first book was published in 2008, and since then I have been very fortunate in that the Joe Hunter series has gone from strength to strength, and to date Hodder has published ten books in the series throughout the world. I am also fortunate in that Harper Collins picked up the rights to the first six books, and since then Down and Out Books have published Joe Hunter in the USA.
So who is this Joe Hunter, I hear you ask.
First off, he’s not your typical British crime fiction figure. He’s not a police inspector or even a private investigator. He’s an English ex-soldier, now adrift in the world after having left a specialist counterterrorism team, and now works for his friend Jared ‘Rink’ Rington’s Private Investigations firm in the US, although Hunter is usually more engaged in the capacity of protector or bodyguard, or is at least seeking to help persons in danger etc. He’s a man of action, and sometimes he is known to be rather uncompromising with the bad guys. Mostly, the Hunter books are compared to those of Lee Child, and I can see why, although Hunter is a very different person – and employs different methods – from Child’s famous Jack Reacher. Many Reacher fans are now Hunter fans as well, though. If I was pinned down to give an accurate description of a Joe Hunter thriller, I’d have to say they’re fun action-adventure romps.
The next Joe Hunter book is called No Safe Place, and goes on general sale on 31st May 2016. This time out Hunter gets to stretch his investigative muscles a bit when he is asked to protect a boy, Cole, after his mother was murdered during a home invasion. But as ever, Hunter has fallen into a much larger mess than it first appears, and soon he has to protect the boy while also trying to discover the truth behind the murderer. I hope readers enjoy Hunter’s latest all-action adventure.

A huge thanks to Matt Hilton for popping by my blog today.  Matt is a #NewAuthorForMe and one I will certainly be keeping my eye on ~ especially since I found out he also writes in the horror genre!!  That and the fact that I am totally #HookedOnHunter!