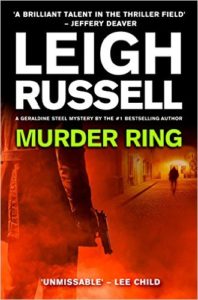 Hearing footsteps pounding along the street behind him he glanced back, fleetingly worried, then laughed because the street was deserted. All the same, he felt uneasy. Everything looked different in the dark. Then he heard more footsteps approaching, and a hoarse voice called out. Turning his head, he made out a figure hovering in the shadows and as it raised one arm, the barrel of a gun glinted in the moonlight… The dead body of unassuming David Lester is discovered in a dark side-street, and DI Geraldine Steel is plunged into another murder investigation. The clues mount up along with the suspects, but with the death of another man in inexplicable circumstances, the case becomes increasingly complex. As Geraldine investigates the seemingly unrelated crimes, she makes a shocking discovery about her birth mother.

A mahoosive thanks to No Exit Press and Leigh Russell for giving me an ARC of this book in exchange for an honest review.

This is the first book I have read by the author, although ashamedly I admit I have a few other of her books waiting patiently on my TBR.  #MyBad

The Murder Ring is part of the Geraldine Steel series and I have to say, although it can be read as a stand alone ~ there were times throughout this book where I felt I would have had a better understanding had I read the previous books in the series.

The plot was relatively fast-paced and kept me guessing throughout. The themes of revenge, loss, anger and the past affecting the future were interwoven through the chapters.  There were various characters that strengthened the story-line, one such being Sam.  I really enjoyed the banter that flowed between Sam and Geraldine despite the seriousness of the case. For me, it made the characters all the more relate-able.   There also seemed to be some new characters introduced –the new DCI : Adam Eastwood who sounded like he may have been a bit of ‘eye candy’!!  Phwoar!

I have to admit, I was slightly surprised when the murderer was revealed, and if I am honest, I am not sure I found the motivation behind the killing all that believable — but that is just my opinion and it certainly did not take away from the story at all.  The author kept me on my toes regardless and so that certainly deserves some recognition, as I usually can figure out the murderer and motivation earlier on in a book!

Would I recommend this book to peeps?  You bet your sweet arse I would!  In fact, I have added to my Geraldine Steel collection and bought the first few in the series to get me started!! For those of you who are already fans, you can click the link below to grab yourself a copy!