Hey #bookjunkies!  My Guest Reviewer, the absolutely awesome Claire Knight, has been busy reading and reviewing a few books don’t you know!  Today’s post is for Michael Ross and his book Hand Over Fist. 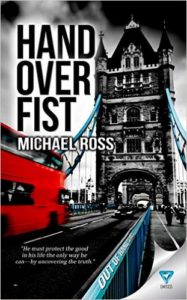 When an old friend disappears, Martin learns nothing is what it seems…

Martin Russell can barely face the future. With dismal life prospects and an estranged family, he is at the end of his rope. When an old friend, Hannah, elbows her way back into his life, Martin’s luck begins to turn around.

Hidden within the shadows of evil, there must be some good…

Ex-policeman Bobby Tanner lost everything one rage-filled night. Now he runs a reading group for alcoholics where he meets a young drug dealer, Zack, who disturbs him in a way that’s hard to define. Bobby soon discovers the teenager is in over his head and has been dealing with a despicable individual known as The Chemist.

The roots of evil run deeper than we imagine…

Martin’s lucky streak begins to unravel when Hannah suddenly goes missing, and he turns to a friend of a friend, Bobby, for help. Thrust into an underworld empire of corruption and half-truths, he learns his friend may not be who he thought she was.

In a shadowed world of deception, stalkers, and drug dealers, Bobby and Martin must uncover the truth, and fast…

Lives depend on it

Hand over fist is a British crime thriller set around Martin Russell who’s down on his luck after his wife left and wiped him out financially and mentally in the divorce proceedings.  But a couple of old friends are willing to help get him back on his feet, leading to an unexpected turn of events.

To start with, the story jumps around introducing the various characters and their backgrounds. They’re an interesting and diverse set of individuals. This group are apparently totally unrelated people but as the book goes on, their stories all start to mix and intertwine together.

I really felt for Martin in his predicament; taken to the cleaners by his ex-wife, left to rent a dingy flat in an undesirable part of town. But enter Hannah, an old friend wanting to help him out. I was a little suspicious of Hannah – in this day and age it’s rare (but not unheard of) that someone is super nice and helps you out particularly to the financial tune Hannah helps Martin for no reason. But maybe that’s my cynical side showing its face.
And there is Bobby, a disgraced copper running a community book club on a Friday night. What did he do to get unceremoniously thrown out of the police force?  Then on the wrong side of the law is Zach, a young man dealing drugs and the elusive Chemist who is deep the dark side of supply and demand.  Finally there is John Staples, former footballer forced into early retirement but becomes a successful businessman.
When the author contacted me on Twitter asking if I’d like to read his book, I was in two minds about saying yes.  I need more books to read like a hole in the head but something about the synopsis of Hand Over Fist appealed to me. I’m glad I did say yes; it’s a enthralling ride through this eclectic group’s lives.
A big thank you to Michael Ross for sending me an e-copy of Hand Over Fist in return for my unbiased review.
Ooooooh!  I am pretty intrigued now!  Like Claire…I need another book like I need a hole in the head….but the nature of addiction is that illogical desire of wanting more of something you just should not have.  So I am thinking that this is another fix to feed my habit and will be swiftly heading to Amazon to check it out!  Click the link below if you fancy joining me!
[amazon template=iframe image&asin=B01EI2RBK2]