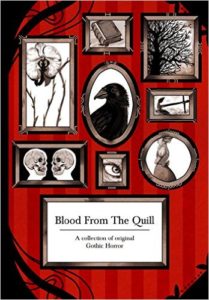 Following the success of Thrills ‘n’ Chills, the Elementary Writers now present a collection of original Gothic horror stories and poetry to read by the fireside on a cold dark night.

I was given this ARC by Vic Watson in exchange for an honest review.

Next to Crime Fiction, Horror is my second favourite genre to read.  Throw a bit of Gothic into the mix  and I am easily persuaded to read! For those of you who may be unfamiliar with the genre, let me share a few thoughts and you may find you are more familiar with it than you first thought!

Gothic horror combines fiction and horror in such a way that it can almost be described as a pleasing type of terror.  The type of fear that thrills you to the core.  The likes of Edgar Allan Poe, Mary Shelley, Bram Stoker….sound familiar?  There is a beauty within the writings of these authors that gives you goosebumps but leaves you with a feeling of…well…an absolutely, heart-racing, blood-surging tremor of emotion rushing through your veins.

Blood From the Quill does not disappoint in its aim to give the reader the feelings of sheer terror and pleasure as you read each of the short stories within this anthology.  The settings are eery, gloomy and can almost be described as a character itself.  The plots vary from story to story but each have the underlying themes of loss, fear, sadness and in some cases a longing for something which cannot be found.  The settings are perfect: in the dark of night, cold and dreary atmosphere –all the right boxes are ticked.

A few of the stories stood out more for me than others and I think they deserve a mention!  The first being The Rotting Orchids by James Wilson.  Really enjoyed this story.  In fact, I wished it had been longer as it verged more on the horror side but still had the description which draws the reader in.  This story tells the tale of murder.  But when the brother and a group of locals go to confront the murderer after barricading him into the house…well…they are in for a shock.  You will have to read it for yourself to get the full picture as I don’t want to give any spoilers away…but I could definitely see this being fleshed out into a novella on its own.

Another fave in this little gem of a book was Her Voice In the Rain by Patrick Welsh.  I really enjoyed this one.  I immediately thought of a banshee when the story began and loved how the voice was revealed through letters from the protagonist’s Uncle who had recently passed..  It was eery, haunting but also mesmerising.  I did not want it to end.

A Dubious Honour by Victoria Watson was also a story that gripped me.  Parts of the story reminded me of the Stone Angels in an old Dr Who episode.  That episode scared the bejesus out of me so when I visualised that while reading this story at midnight last night….let’s just say my insomnia is not what kept me awake!

And finally, Where Evil Lies by Kay Stewart and The Follower by James A.Tucker were also pretty bloody awesome!  I felt these had more of the horror element with a hint of the Gothic theme throughout.  Both evoked feelings of fear, tingles and chills for very different reasons.  The descriptions alone placed you right in the pages of these stories.

So there you have it #bookjunkies!  For those of you who like to dabble in the horror genre, this book is definitely well worth a read.  I am off to download the previous anthology Thrills ‘N’ Chills for another fear fix!  Click the link below to grab yourself a copy…but prepare yourself for some goosebumps and spine-tingling moments!

One Reply to “Blood From the Quill ~Review~”