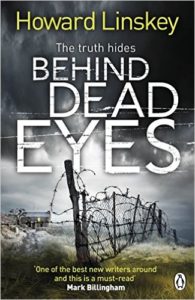 A corpse is found: its identity extinguished in the most shocking manner imaginable.
Detective Ian Bradshaw can’t catch the killer if no one can ID the victim. Out there, somewhere, a missing young woman may hold the answers.

Journalist Helen Norton is about to uncover a massive criminal conspiracy. She just needs the final piece of the puzzle. Soon, she will learn the price of the truth.

True-crime writer Tom Carney receives letters from a convicted murderer who insists he is innocent. His argument is persuasive – but psychopaths are often said to be charming…

WHAT IS THE DARK THREAD RUNNING THROUGH THESE CRIMES?

A huge thanks to the author and Jenny Platt from Penguin Random House UK for an ARC of this book in exchange for an honest review.

I cannot go any further without saying how absolutely GORGEOUS the cover of this book is.  That alone would have immediately drawn me and caused the purse strings to be released.  Stunning does not even come close to describing it. *Sigh*  I am a sucker for covers!

So what did I think of this book?  Well, I have to say– I am definitely a #newbie when it comes to Howard Linskey.  I had heard about him through various bloggers and book clubs but had never actually read his work.  WHAT THE HELL WAS I THINKING!?  This guy rocks!

The story-line instantly grabbed me.  It is not your typical crime thriller but the opening certainly grabs you by the throat and keeps you interested throughout. Fo’ Shizzle peeps!!  The pace is perfect as there is a brilliant lead up to the twist and when that hits –WOW– I was left surprised, excited and thoroughly entertained!  And the ending –well–just bloody SUPERB!

DI Kate Bennett is introduced as #NewBlood to the force.  She is the first female DI in the North East and I loved her character.  Strong-willed, curious and does not like to be left out of the loop–especially by her male counterparts.  I suspect some serious ass-kicking from her will be on the cards in future books.

And I adore Detective Ian Bradshaw.  He may not be everyone’s cup of tea ( I might be looking at you BCB and More ) –perhaps coming across as the moral compass in a world filled with complete and utter but interesting arseholes.  But that is EXACTLY what I like about him.  There is a part in this book where he crosses paths with a complete twit of copper and says “You’re not a police officer…you’re an accomplice” –that’s right Bradshaw…you tell ‘im! BOOM!  Bradshaw is disgusted by his colleagues behaviour –showing exactly what kind of copper he is.  Loved it!! Love him!

I cannot leave out Tom Carney, the journalist who works with the police to solve the crime. The book opens brilliantly introducing us to Tom via the convicted killer.   I think I may have a wee fictional crush on this guy–Tom Carney that is, not the convicted killer!  There is also a great rapport between Tom and Ian –won’t go into too much as I don’t want to spoil the book — needless to say, there is initially no love lost between the pair to start with.  And Helen Norton too.  She is strong, yet vulnerable ~ all the characters, even the baddies — have substance.  EEEEEEK!  I just relished every page of this book!!

Justice is the main theme that binds the characters, the story and the setting together perfectly.  Revenge, love and anger also are sprinkled throughout the pages.

I adored this book and cannot gush enough about it!  It will certainly appear in my TOP READS of 2016.  I highly recommend you go out and grab yourself a copy of this — and ALL of this author’s work as if this is anything to go by…I will be #FanGirling for some time!  Make sure you scroll down and read the Guest Author Post — it is FANTABULOUS! You did good Homie!!

Guest Author Post: What Doesn’t Kill You ~ By Howard Linskey
I’ve got a book out this week. It’s called ‘Behind Dead Eyes’ and is published by Penguin Random House. Just writing that sentence makes me realise how lucky I am. I know the long odds against being published because I was an aspiring author for a very long time. I’ve paid my dues in rejection slips.
I have wanted to be a writer since I was eighteen years old. I had no self-confidence then and didn’t think I was any good at anything but I wasn’t bad at telling a story. I used to escape to my local cinema in Durham, where I watched more than my fair share of really bad movies and it made me wonder if I could do better. I finally gave it a go and the first script I wrote was good enough to be retained by a famous film production company. It seemed I had finally found something I could do and I felt like I was on my way. Luckily I did not realise then just how long it would take for me to arrive at my eventual destination as a published author. I probably would have wept if I had known it was going to be more than twenty years.
I got a lot of rejection along the way. People would praise my writing then list the reasons why my story was not for them. Those nice rejections kept me going for years. Meanwhile I wrote for a Newcastle united football fanzine and studied journalism, before going on to work for three different newspapers and write articles for magazines and web sites. I even had a three year stint as the English Premier League football correspondent for a Malaysian magazine. All of this was good fun and it boosted my confidence but I really wanted to write fiction.
Then I had an idea that seemed more natural as a book than a script. It was a true story based on an event from the 2nd World War. I sent the first six chapters to a literary agent who liked it and all of a sudden I had representation but I had to finish this epic tome before he could send it to anyone. It was a vast undertaking and involved heaps of research but to this day it remains unpublished. One editor liked it enough to take both my agent and myself out for dinner to discuss it but somehow the interest gradually waned and everyone moved on to new things, including me.
My agent then told me about ‘Black Star Crime’. Harlequin wanted to publish short crime novels like their hugely successful Mills & Boon stories. I was offered the chance to ‘audition’ with a 7,000 word sample and I got the job. Somehow I managed to write two crime novels in five months, featuring a character they gave me; Nigerian detective Joseph Soyinka, using the pseudonym Chris Freeman. I was finally published, along with the other launch titles….one week before the credit crunch. Subsequently retailers refused to take the books in sufficient numbers and the whole project was quickly scrapped because of the inconvenient global recession that coincided with my debut novel.
Lesser folk would have been gutted by this inauspicious start but I contented myself with the thought that I was now officially an author and I moved on…again. I told my agent I had an idea for a book called ‘The Drop’ about a white-collar gangster in Newcastle. We discussed it in the pub until he finally held up his hand and said, ‘stop! This could be the one!’
I figured I’d better get on and write it then. He was right, it was the one. No Exit press published a trilogy of my David Blake stories. The Times newspaper named ‘The Drop’ as one of its top-five thrillers of the year and the whole series was optioned for TV by Harry Potter producer David Barron, which still all sounds a bit unlikely but it actually happened. I suppose I could have carried on telling David Blake stories but I didn’t want to write 25 books about the same character until everyone was sick to death of him and I already knew what I wanted to write next.
I had an idea for a story set in the nineties with flashbacks to the thirties, involving two journalists and a detective who have to investigate an ancient cold case and solve the disappearance of a young girl. This became ‘No Name Lane’. One day, my agent phoned me from the London Book fair. I could hear the buzz of the event in the background as he told me that Penguin loved the book and the characters and had offered me a three book deal. It was a moment I will never forget; made all the sweeter by the years of ‘thanks-but-no-thanks’ letters I had received.
‘Behind Dead Eyes’ is out this week. It’s my second book for Penguin and tells the story of a convicted murderer who swears he is innocent, along with the mystery of an unidentifiable corpse and a teenager who has vanished without trace. Reporters Tom Carney and Helen Norton are reunited with Detective Sergeant Ian Bradshaw, as they attempt to discover the truth. Thankfully advance reviews have been great and there were no ‘nice’ rejection letters from my editor at Penguin, so I can enjoy publication day. I know how immensely lucky I am to be here but I reckon I’ve paid my dues too. I can wear those rejections proudly like battle scars. One thing I will never be is ‘an overnight success’ and, you know what, I’m quite proud of that.

Mahoosive thanks to the awesome Howard Linskey for this Guest Post!  And for asking me to join this Blog Tour.  I had a blast and found a #NewAuthorForMe to boot!  Wahoo!!