Woohoo #bookjunkies!  Another cracking review by my ‘lil awesome possum, Claire Knight.  This is a short story by- Simon Maltman called Riot Score! 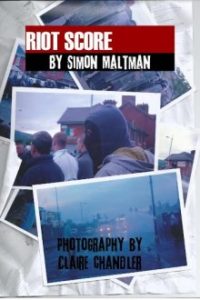 Set on the streets of Belfast where armed riot police are the norm, Simon Maltman has written his story of a heist and the consequences.

This is a new e-book that mixes a noir crime story with new original street photography. The photographs were taken during a riot in Belfast and the noir story intersects with it.

Simon Maltland’s Riot Score is a short story about the hours after a major heist set against the backdrop of the city of Belfast in turmoil. Photos are interspersed in the 18 pages of story to portray some of the actual sights of a city divided by loyalties and belief.

I’ve said it before when I’ve read short stories, I’m amazed how a writer can cram so much into such a short space of narrative. You hit the ground running and it’s a sprint finish.

The photos taken by Claire Chandler are raw and give a visual insight into what life is like in a riotous Northern Ireland.

The one issue I had with this ebook is the font the author has chosen to use. I personally felt it was difficult to read on a kindle. However the look does fit with the theme of the story.

I’d like to thank the author for asking me to read and honestly review this ebook.

This short story can be purchased by clicking HERE