Hey #bookjunkies!  Scottydog is back with another of his epic reviews!  This one may make you think a little, so have a close read!  Into Hell’s Fire by Douglas Cavanaugh is the book of choice!  So without further ado…. 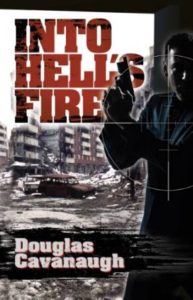 An American spy thriller that will have broad appeal to an international readership, Into Hell’s Fire is a novel that pushes the boundaries between fact and fiction. Lucas Martin, a retired agent of the U.S. government, is recalled to duty to assist Washington in deciding its Balkan policy at the beginning of the Siege of Sarajevo. Hired to accumulate accurate intelligence and monitor the crisis as it unfolds, little time passes before he is entrapped in a game of life and death with a sinister Serbian general. Crossing regional borders, flanking battle lines and dodging sniper fire, Lucas uses his wits and experience to meet his Serbian foe head on. But does he still have what it takes to defeat his foe? Will good trump evil in a world where rules and morality have been left by the wayside? Readers of Into Hell’s Fire will find answers to these questions and much, much more.

Here’s a question for you, CrimeBookJunkies: Where were you, and what were you doing, during the summer of 1994?

OK, technically two questions, but have a go and see if you can remember.

I was 21 in 1994 and at university. My student days consisted of hanging out with the girl I was dating at the time, taking obscene advantage of the free sports activities that the uni offered in the evenings, and spending not nearly enough time studying. Reminiscing as a now 42 year old, I realise that I didn’t have a care in the world. If I could have that time again I’d like to say that I would have applied myself a little bit more, not dated that girl at all (that’s another story) and spent less time wearing that ridiculous Che Guevara t-shirt. But hey, we were all young once. I’m just glad that most of my daft stuff was done before the advent of camera phones and YouTube.

I admit, I was pretty oblivious to the world outside my own privileged, sheltered little bubble. Thankfully a visit to the Planetarium in London made me realise that I’m not the centre of the universe.

But the point is this: During mid 1994 the Rwandan genocide occurred. Anyone remember that? As I was heading off to the uni sports hall for a game of whatever before I hooked up with uni girlfriend, Tutsi and moderate Hutu were being slaughtered by members of the Hutu majority government.

Am I ringing any bells now?

If you don’t remember the fact that over a 100 day period between 500,000 and 1,000,000 Rwandans were killed, you might remember the news reports of the rapes, the torture and chopping of limbs. And that leads me on to my next question: What effect did this have on you? Did you watch a 2 minute news report, make a ‘tutting’ sound to signify your disapproval at mass genocide and torture, then make a quick brew during the adverts? Be honest – over 20 years later, does what happened in Rwanda ever enter your mind or impact on your life today in the slightest?

Let’s try a more recent one then. Sticking with summer, but this time the year is 2014. I was busy working in my current ‘pest control’ role, and in the evenings I was planning an epic 3 week holiday with my best pal. We were going to take the ferry from Portsmouth to Santander, and then spend the next 3 weeks riding our motorcycles around Spain, savouring the summer sun and every delight that the Iberian region has to offer. And what a holiday it was too.

At the same time that I was drooling over Spanish road maps and worrying about whether or not I had enough memory cards for my camera, the IDF (Israeli Defence Force) launched Operation Protective Edge, during which more than 2,100 Palestinians were killed in the Gaza Strip, along with 66 Israeli soldiers and 7 civilians in Israel.

Yeah, that one kinda flew past me as well. After all, I REALLY wanted some great bike shots, and running out of memory cards just wouldn’t do. The UN says at least 2,104 Palestinians died, including 1,462 civilians, of whom 495 were children and 253 women.

Regular visitors to CrimeBookJunkie will know that when I reviewed Russell Blake’s superb ‘Rage Of The Assassin’ I made the point that every year in Mexico (the story’s location) approximately 8000 people a year die in drug cartel related violence.

Did that statistic mean anything to anyone? You can bet that if an issue in the UK cost 8000 lives a year the politicians would quickly cave in to the public outrage and something would damn well be done about it, by jove. Don’t those cartel Johnnies know the British don’t put up with shenanigans and high-jinx? By the end of Felipe Calderón’s administration (2006–12), the official death toll of the Mexican Drug War was at least 60,000. Estimates set the death toll above 120,000 killed by 2013, not including 27,000 missing.

Still, I hear that Cancun and Puerta Vallarta are lovely this time of year.

Let’s go back to the early 1990s. I’m still at uni, enjoying student life and proving that my decision making with women was no better then than it is today. Wikipedia states that the Siege of Sarajevo was the longest siege of a capital city in the history of modern warfare. Apparently it lasted from 5th April 1992 to 29th February 1996. That, CrimeBookJunkies, is a total of 1,425 days. That’s three times longer than the Battle of Stalingrad and more than a year longer than the Siege of Leningrad.

What’s that, ya say? Death toll? Well, I’m glad you asked. 13,952 people were killed during the siege, including 5,434 civilians. Not forgetting, of course, the usual atrocities, crimes against humanity and the subsequent International Criminal Tribunal for the former Yugoslavia which sentenced two Serb officials to life imprisonment and 29 years respectively for what they did.

So if I gave you an atlas with none of the countries labeled, would you be able to point to the Baltic region, let alone the country of Serbia? Douglas Cavanaugh could. In fact, I think if you gave him a piece of paper he could probably draw you a detailed map of the region. He’d show you not just the main arterial routes in and out of the country, but the lesser-travelled back roads and the places frequented by locals and those ‘in the know.’

Douglas arrived in Croatia in 1996. An American by birth, he spent more than 18 years in Croatia. When he first landed there, the war in neighbouring Bosnia and Herzegovina had just finished, but the effects of that conflict were far from over.

Amazon notes that during an author interview Douglas said, “Post-traumatic stress syndrome in Croatia was epidemic. Many people I knew well had immediate family members who had been killed. Countless others had been separated from their families and friends who had relocated to other parts of the world as refugees. That sort of a forced separation can be brutal on an individual. And more than a few people told me how they had lost everything they owned, and how it all seemed to have happened overnight.”

It seems that Douglas well and truly had is eyes prised open for him, whether he wanted them opened or not. His daily contact with those whose lives had been changed by the conflict prompted him to set his novel, ‘Into Hell’s Fire,’ in that region during the time of the begining of the Siege of Sarajevo. After all, don’t they say, ‘write what you know?’ And boy oh boy, you can bet Douglas knows his subject matter here.

‘Into Hell’s Fire’ (great title, eh, CrimeBookJunkies?) is the story of Lucas Martin, who the US State Department considers to be a ‘trusted source of reliable information within the borders of ex Yugoslavia.’ In 1984 the State Department placed Lucas in the Balkans as an observer and security specialist. Lucas retired in 1991, but when the Siege of Sarajevo begins Lucas watches with horror, the events on TV and is pressed back into service by a government desperate to utilise his knowledge of the area and its people.

‘Into Hell’s Fire’ see Lucas return to the region to gather intelligence, investigate reports of concentration camps . . . and to receive a handsome $25k per month for his trouble. Hell, I’d do it for half that, but probably not nearly as well as Lucas.

You see, Lucas clearly has Douglas Cavanaugh’s affinity for the region, as well as a sense of obligation to a project he had previously committed to. As a reader I really could feel Lucas’ affection for a part of the world which he clearly knew intimately. The first third of the book is quite heavy with regional history and back story and, to be honest, the amount of history might not be to everyone’s taste. That’s what I thought at first, but I soon came to realise that the history is there to make a point. You see, Sarajevo isn’t just a place where Lucas and his antagonist Serbian military officer spar with each other – I felt that Sarajevo is one of the characters. I like this novel because it pushes you to think that little bit more.

As with all good thrillers the action is well done and is, er, thrilling. From speaking with a few author pals, writing action scenes can be very hit and miss, and isn’t something all authors can do well. Douglas Cavanaugh can do it. From the mortar shells raining down on cars speeding towards the city, to the utterly sublime way Lucas entered a building to take out Serbian snipers who were targeting civilians, it was one hell of a ride.

Die hard fans of crime novels should not be put off by this, or dismiss this book as a war story. It isn’t. It’s a novel for the thinker, for someone who wants to be immersed in something new, something out of their comfort zone. Give this book a try and you’ll discover some real little gems buried in amongst a good, solid novel . . . like the interaction child Lucas has with a downed American pilot during WW2, the superb way that Lucas was granted admission to the West Point Military Academy and, my personal favourite . . . the US Marine who won the Congresional Medal Of Honour, who, at the medal awards ceremony, asked the visiting US Congressman for a job upon leaving the military! Regular CrimeBookJunkies will know that I don’t like to give spoilers in my reviews, so trust me when I say that you’ll find these hidden gems a true delight, buried there by an author who writes very well and shows superb promise.

I genuinely hope that Douglas Cavanaugh writes more. Douglas, we thank you for getting in touch with CrimeBookJunkie, and I thank you for making my daily commute to ‘pest control central’ that little bit more bearable. We salute you, sir, and ask you to keep writing.

What did I tell you peeps!  Epic!  If this book piques your interest, click on the link below!