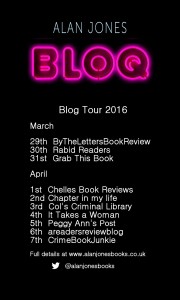 I am ridiculously excited to be “shutting down the Bloq” Blog Tour today! Did you see what I did there #bookjunkies!!!?? ? Not only do I have my review of this pretty damn awesome book to share, but the author himself, Mr Alan Jones, has been kind enough to write a piece on the importance of Bloggers to indie authors. After all the torture I put Mr Jones’ through, I am surprised how nice he is to me! At least he gives as good as he gets! #GottaLoveATrier ?

A gritty crime thriller. Glasgow man Bill Ingram waits in the city’s Central Station to meet his daughter, returning home from London for Christmas. When the last train pulls in, and she doesn’t get off it, he makes a desperate overnight dash to find out why. His search for her takes over his life, costing him his job and, as he withdraws from home, family and friends, he finds himself alone, despairing of ever seeing her again.

I was given an ARC of Bloq by the author in exchange for an honest review.

Before I start my actual review, I need to point out how freakin’ awesome the cover of this book is. The colours shout out at you and portray a gritty, eery, dark side of the London club scene–which works– as that is exactly what this book is about….kind of! ?

Have you ever read a book and wondered if the author could deliver the same quality of read as the previous one(s)? This is how I felt when I was asked to read/review this book. You see, despite some pretty gruesome happenings in the first few pages- I ab-so-friggin-lutely loved Blue Wicked. So I was worried that Bloq could be nowhere near the standard I had in my head. I could not have been more wrong!

Set in London, the author takes us on a journey into the seedier side of the London club scene. I was immediately hooked from the get-go. The plot itself was riveting and fairly fast-paced — but not so fast you lost your way. I really struggled to put this book down once I started. The sign of a great read in my books!

Loss, revenge, a search for justice and even love are just some of the themes that have been woven into the story-line. A father’s heart-ache and a sister’s search for the truth- draw these two unlikely souls together. It was, dare I say, beautifully done, full of twists and an unexpected but kick ass ending.

There were various characters within this book that had a role to play in delivering the story. None were insignificant, but a few stood at for me. For instance, the main character- Bill Ingram. He was dedicated, clever and committed to finding/saving his daughter without any concern for himself. I really connected with him. Similar to a #KillerHook, if a character doesn’t grab me, I quickly lose interest. Did not have that problem with this book! I did wonder if the author injected some of his own personality traits into this character…I just had that feeling. Hang on…I may be complimenting the author! Oh no! I can’t have that! #BadNoelle *kidding*

I adored Anna too! She was strong, but vulnerable. Clever but knew how to play that down if the situation called for it. She just rocked! And then there was Aleksander …he just oozed nasty peeps!! I bet his eyes were black holes as this guy was cold. A user of women, owner of the Bloq, a master manipulator…I seriously wanted to kick him where the sun don’t shine many a time!! *shivers*

So as much as I love winding up Mr Jones I have to say that this book was a cracking read and will most certainly make my Top Reads of 2016. I highly recommend you *dance* your way over to amazon and get yourself a copy of what has to be Alan Jones’ best book so far…or you can just click the link below! But don’t run off before you read the Guest Author post!

Why bloggers are so important to indie authors- Alan Jones

I’ll tell you a story. It took a long while for me write my first book. I pissed around in fits and starts. Even when it was finished, I spent a long time tweaking it, but when I was happy with it, I gave it to a few committed readers; they all liked it, and said they would buy it.

I purchased a Writers and artists yearbook, and optimistically sent my manuscript off to an agent or two, and a couple of publishers. To cut a long story short, I pretty well went through the whole list of agents and publishers who would look at new authors, receiving a new set of rejection letters every six weeks for the next year until one publisher asked to see the whole book (I’d sent the first three chapters, as per submission guidelines).

A week later I received another rejection letter, but this one suggested a pile of edits that would help, and that there was probably a good chance that I could get it published, perhaps at one of the smaller specialist publishers.

After another six months with the same pattern of rejection letters, I got an email from an agent working with quite a large agency asking to read the whole book. I sent it to him, and I got a regretful email back telling me that he liked it, but he already had an author on his list writing very similar books, but he suggested that if I self-published, the book might find a niche market and do quite well.

I took his advice, and with no thought other than to get the book on to Amazon, I had it done within the week. I sat back and waited, naively thinking that people might notice my book and start buying it. (I know; even I think it’s funny in hindsight.)

As you might predict, precisely nothing happened, so I started doing some research. For the first time, I came across the term ‘Blogger’, and learned that the best way to get noticed was to ask a few of these bloggers to read your book and recommend it to other readers.

Sure that they would love the sound of my book, and be drawn in by the blurb and the first few pages I included with my email, I contacted every blogger I could find on google who stated they were happy to review self-published books.

They all replied, the majority with very kind replies saying they were inundated by books from self-published authors and would struggle to fit mine, but wished me good luck.

Three or four did ask for a copy of the book, and one, a lady by the name of Peggy, from Pennsylvania, said she’d actually purchased The Cabinetmaker as she loved Scottish books, and just liked the sound of it. She did a lovely review, gave me lots of good suggestions to help me get noticed, and introduced me by email to James Oswald, who gave me some more hints and tips, and tweeted that my book was ‘well worth a look’.

Gradually, more and more bloggers reviewed my books, and although there were one or two three star reviews, most bloggers gave my books four or five star ratings, with some lovely comments in their reviews.

Every single blogger I’ve been in touch with has been fantastic; even the ones who didn’t feel that my books were for them (they are pretty dark and gritty) offered to do guest posts, cover reveals and the like.

I’ve found that if bloggers like your books, you’ll receive a tremendous amount of support from them, from promotional help and suggestions on which Facebook groups would be worth joining, to sharing and re-tweeting any book related information that you put out on social media.

And they are always willing to answer a question. If you’re an author and are unsure of anything to do with promoting your book, ask a blogger – they’ve seen which authors do it best and what strategies the good ones use.

I know a few bloggers who struggle with keeping on top of their social media and often use sites similar to SidesMedia (https://sidesmedia.com/) to improve their social media reach. It helps them to interact with their followers and even grow their followers in some cases. I sometimes struggle to juggle the writing and the social media stuff, but my Facebook and Twitter activities pale into insignificance compared the number of tweets and posts from each of the bloggers I know, and they are reading up to a book a day as well! It now takes me a week to read a book because I struggle to find the time, and I don’t have to do a review on top of it all. When do bloggers sleep?

I’ve not sold a vast number of books (yet), but I know this. Without the blogging community supporting and promoting independent authors, and with no budget for marketing, I would have sold very few. Learning to also create my own book cover design would have been of great benefit to me back then also. As a self-published author, I would have little or no chance of success. Being talked about by bloggers allows indie writers to be in the mix with established authors, and gives a chance for our books, if they are good enough, to reach a much wider audience.

The proof that bloggers are becoming much more important in the success of a book is the number of mainstream publishers who have woken up to the increasing influence that bloggers have on the success of a book. As printed newspapers decrease in circulation, and the number of bloggers increase, book blogging will probably become an even more significant part of the reviewing scene.

So I’m giving a big thumbs-up to the book blogging community, especially those of them who have reviewed my books or helped me in other ways.

There are too many to list, and I don’t want to leave anyone out, so I’m not going to mention any by names apart from Peggy, who was the first blogger to pick up on me, and that demon blogger Noelle, because this is her CrimeBookJunkie blog, and I’m genuinely frightened of her! ?

Oh Alan…don’t be silly! I am a “pussy-cat” really…..? But love the #DemonBlogger …maybe I should change my name….?