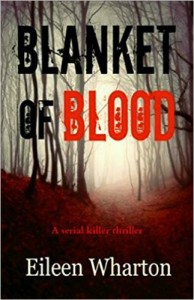 The gripping first novel in an explosive new crime series.

The body of a baby is found in the woods. But all is not as it seems…

Senior Investigating Officer, D.I. Gary Blood, must use all his powers of deduction to bring to justice the most sadistic murderer his force has ever seen. A killer unlike any he has hunted before. But Blood has problems of his own. Can he stop his private life interfering with the case?

To find the killer Blood needs to understand the motive. But this is a place full of secrets, where dark pasts lie buried.

Will Blood catch The Crotchet Hook killer before it’s too late?

The truth is closer than you think.

Blanket of Blood is the first book in a series of Gary Blood crime novels.

I was given this book from Fred Freeman of Bloodhound Books in exchange for an honest review.

I have to say that I was pleasantly surprised when I started this book.  The opening reminded me of cross between “Ted Bundy meets Buffalo Bill” (Real life serial killer coupled with the serial killer from Silence of the Lambs for those of you who may not be familiar!) so my interest was immediately piqued!  I was also curious as to how the book would be as this is the author’s first work in the crime fiction genre and with this being my absolute favourite genre, I tend to be a bit more critical.  #MyBad

Although I was not doing a beta read, I had a few suggestions which I fed back through Fred and which appear to have been taken on board in the final version.  I really think it has made a difference to how the story reads. Me being a bit of a cover snob…well, I have to say…I LOVE the cover of this book!  I think it gives a real feel for the story and is very eye catching!

So about this book then!  This was a fairly fast paced story. The plot was interesting and kept me hooked, although the sub plots, were probably not as strong or pertinent in my opinion.  Don’t get me wrong — they were interesting, I just don’t think they were as well developed, so at times I did find myself questioning their relevance.  In some ways, they played a key role in the characters background stories, but could overwhelm the reader (ok,yes me…again). The build up of the main events were, however,  ordered in such a way that it was easy to follow with the reader being drip fed information with enough unrelated clues to throw those amateur detectives (yes..me!) off the track!

A few themes ran through out the story-line – the main one being revenge for a past wrong.  But there also was loss, trauma and childhood abuse to name a few.  I felt the style of writing from both the first POV (the killer) and third point of view was well executed.  At times it had felt slightly disjointed, but not enough to confuse the reader ~ I can get easily confused!

Gary Blood, the protagonist, I had a definite connection with.  Despite his flaws, he was a very likeable character as the main DI.  With the classic “bad boy” qualities ~ drinker, sleeps around, you know the score~ he was also passionate, dedicated to the job, haunted, and on the hunt for justice. A great balance.  Sue Herron on the other hand, I felt less connected with.  I liked her character, she was strong-willed, determined and in search of answers to her past but I think because it jumped a bit in relation to her sub story…well, I managed to easily lose interest.  I am guessing that as this is a series, we will learn more about Sue and perhaps my feelings will change.  The Killer ~ now this was a character that intrigued me.  The back story was key and I found myself questioning everything about who she/he could be.  I must admit, I did figure out who the killler was eventually, but it took some doing!!

So would I recommend this author and this series to my fellow CrimeBookJunkies?  Hell yeah I would!  I am looking forward to seeing how the characters develop and what new case Gary Blood will find himself embroiled in, in the future.  Hats off to Ms Wharton for a great entrance into the crime genre!

Blanket of Blood was published April 1st and can be purchased if you click the link below…go on…you know you want to!