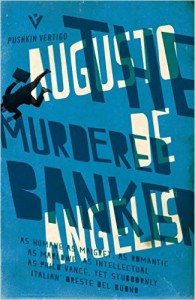 A tense and dramatic murder mystery from the father of the Italian ‘giallo’ crime genre, featuring Inspector De Vincenzi.

A body is discovered in a Milan apartment, and Inspector De Vincenzi investigates. The apartment happens to belong to and old university friend of his, Aurigi. When the body turns out to be that of Aurigi’s banker, and a phial of prussic acid is discovered in the bathroom, suspicion falls on the apartment’s owner, and De Vincenzi is agonisingly torn between his sense of duty and his loyalty to an old comrade…

This intensely dramatic mystery from the father of the Italian crime novel, Augusto de Angelis, is the first to feature his most famous creation – Inspector De Vincenzi.

Yet again I’m learning about another police organisation and investigation method. In my last read I was in modern day Japan. This time, I’m in early 20th Century Italy so no mobile phones and no portable radios; just the basic telephone but this still wasn’t as common as it was in the latter part of the century.

The story is a classic whodunnit. A banker shot dead in another man’s apartment who at the time of the murder, was in the police station.

There are nods to Agatha Christie’s writing and particularly Poirot with the phrase “little grey cells”. For me, it wasn’t as cleverly written as Christie’s mysteries but it had an air about it, similar to the Poirot adaptations on the small screen. Having read the “Did You Know” section that follows the story, it was written at a similar time to Christie, making the author her Italian contemporary which could explain the likeness.

The translation from Italian is good. At the start there were a couple of words I had to look up like Prussic Acid aka cyanide but this could be down to the evolution of language in the past 80 years. The author did switch between using characters’ surnames and forenames in the narrative which was a little confusing to begin with.

The story wasn’t outstanding but it’s done enough to pique my interest – a few red herrings through the story to keep me guessing. I do want to read both more from the author and more Italian crime from the era and possibly more modern examples.

Thank you to Mollie at Pushkin Vertigo and Crimebookjunkie Book Blog for this ebook in return for my unbiased review.

Fantastic Review as always from my ‘lil possum, Claire!  If this books piques your interest, click the link below!