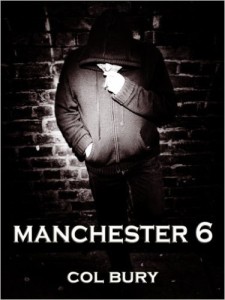 Manchester 6 focuses on the best and worst of human nature, personified in the gritty urban setting of Manchester, UK. It features a plethora of no-nonsense characters you’d ordinarily want to avoid. The six stories highlight generally decent folk who become embroiled with the lower echelons of society, aka scumbags. Whether it’s the paranoid, spliff-sucking writer who has an online spat, or an ex-soldier hunting a notorious gang, there’s conflict galore. Meanwhile, hell hath no fury, like a window cleaner ripped-off of his Christmas tips, and a heroic family man faces Al Qaeda and the decision of his life. When you add to the mix, the luckiest gambler in town having a ball, coked up in a lap-dancing club, and an eccentric ice cream van owner who pushes ‘friendship’ beyond the limit, you know something’s got to give, and, boy, does it! This collection oozes dark wit and has more twists and turns than a snake on speed.

Having been overwhelmed with review requests lately, I decided I needed to kick back and read some of my own purchased books, so I had a browse of my kindle and came across a name that I knew would not leave me disappointed, Col Bury.

Manchester 6  is a collection of 6 short stories (and a bonus 7th) told from various perspectives that ultimately lead to someone ending up with an undesirable conclusion -whether that is in the permanent or metaphorical sense.

The assorted plot lines reel you in from the start, some admittedly more than others, but with an ever increasing pace, the endings of each of these stories definitely leave you craving for more!

Each story is set in…Manchester…were you surprised?  Or did the title of the book give it away….it would have been really funny if Mr Bury used his brilliant sense of humour and screwed with our minds by setting the tales in somewhere like…Birmingham…though he writes what he knows and he certainly gave me a sense of what the darker side of Manchester holds.  Note to self: stay out of Manchester! <Kidding!…sort of> ?

Within the short stories, we come across a huge array of interesting characters, some of which reminded me of Martina Cole’s gritty, gangland badasses!  You know the ones, they leave a bad taste in your mouth long after the book has been shelved!  And the characters were relate-able…not that I mix with seedy people….well I do…but that is work, and I am not talking about the offenders! ? They had a realism to them — it could be the guy across the road, your friends…you know what I mean?  Nicely done, Mr Bury.

There were three stories that particularly stood out for me:  Lucky Shit, Forum of Fury and Snakes & Ladders.  What I loved about each of these stories was the dark, but funny humour wrapped up in irony and the fact that each could have had a very different ending (whether it was better or worse) if each of the main characters had just chosen a different path!  Particularly Forum of Fury, it made me laugh but I was also almost as anxious and paranoid as the main character at times!

Col Bury has a great style to his writing.  He captures the moment, pulls you through and then leaves you clinging at the edge! His descriptions at times had me right there in the story and I loved some of them so much that I would be more than happy if they turned into a full blown book!

So if you want a gritty, dark, twisty but relatively quick ride…jump on the bus #bookjunkies and grab yourself a copy of Manchester 6 – you will not be disappointed!  I am off now to read another collection of Col’s short stories: The Cops Of Manchester…see ya on the other side!