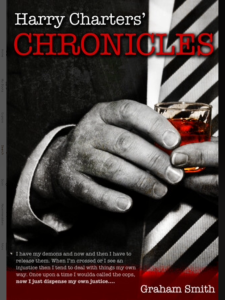 Join gumshoe detective Harry Charters as he tries to escape his demons with a shot of bourbon and a mystery chaser. His investigations include a rigged poker game, a missing teenager and tales of domestic strife. He also gets himself into the middle of gangland power struggles and comes head to head with a crime family who run an entire town.

Harry Charters is not the kinda guy who calls the cops. Instead he dispenses his own brutal justice as he rights wrongs and settles balances. Will he come out on top or will the bottle get the better of him? Read Harry Charters Chronicles to find out.

It’s no secret to anyone who follows me on Facebook, Twitter or who happens to read my blog posts/reviews, that I am a huge fan of this author’s work.  Ok…Ok…I adore Graham Smith’s books to the point where when I am not reading his work, I am counting down the days/weeks or months until I get my next fix!   So when I came across this collection of short stories while browsing my kindle …a big ‘ol EEEEEK! was expelled from my mouth as I eagerly sat down and started reading.

The Harry Charters’ Chronicles is composed of 7 short stories detailing the protagonist, Harry Charters, unconventional methods of private investigation. For those of you who enjoy a good gumshoe detective story and don’t mind a little of the unexpected, this book will be right up your street!

Harry Charters is an ex-Army, ex-boxer, heavy drinking son-of-bitch Private Investigator who deals his own kind of justice.  Charters is not afraid to use violence as a means to an end, although he draws the line at women and I would say/assume children too!  It was nice to see he had some morals/ethics hidden deep beneath his badass exterior!

The setting of the stories brought me back to the 1940’s ~ hang on…I mean from what I have seen on tv or read in books!  I am not that old!!  I could almost visualise the smoke-filled rooms, gangsters sitting on bar stools planning out their next big job and brawls/arguments ensuing following the consumption of copious amounts of boubon.  This also came out in the language the author used such as “He had the kind of face that tricked women into bed” ~~ it just oozes the feel of that era.

The pace was of the short, sharp, shock nature.  With an immediate hook, the stories were not overly descriptive and the endings smacked you in the face leaving you with a bit of a rush.  With Mr Smith, I have learned to expect the unexpected…and of course, he did not disappoint!

Harry Charter and the cases he finds himself involved in, reminded me of Raymond Chandler’s Philip Marlowe or Mickey Spillane’s Mike Hammer.  Both of these characters have a streak of dark vigilantism and have no qualms about rubbing shoulders with the criminal underworld.  But even they are pussycats compared to Harry Charters!

Two of the stories really stood out for me: All A Broad and The Smell of Perfume.  I was absolutely shocked with the first one as it showed Harry to have an almost good side to him.  A similar type of character to this authors Harry Evans ( from Snatched From Home) but…well …worse…..All A Broad showed there are just some things that Charter will not tolerate.  It was a great story!  But The Smell of Perfume…this just rocked!  Again, we see that Harry has a human side as his desire to help a friend and man he respects, outweighed his need for money/alcohol…did I mention he is a heavy drinker?!  A friggin alcoholic more like….this guy would put even the most hardened drinker to shame!  The final line in this short story really was a great one!  No spoilers though…you have to read it for yourself.  But it is probably a line I will not forget any time soon.

I have to say…I do worry about Mr Smith and what goes on in his mind when I read his books, however, I worry even more about the fact that I am drawn to them so much!  Would I recommend this book…you better friggin believe I would!  Even for those of you who may think this style of story is not to your particular liking…I think you’ll find you are pleasantly surprised!  I was!