Well looky looky what I have here #bookjunkies!  The “devilishly handsome” -his words, not mine lol, Scottydog is back with a cracking review of Russell Blakes bio-thriller Upon A Pale Horse! 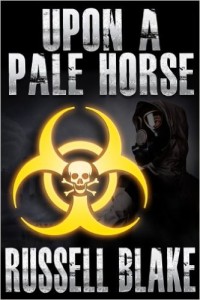 When young attorney Jeffrey Rutherford’s brother is killed in a plane crash minutes after takeoff from JFK, his life is turned upside down – especially when he discovers that his brother’s career wasn’t what it seemed. Jeffrey’s staid existence is upended as he races to unravel a Gordian knot of deceit and betrayal, and ultimately must battle an unstoppable adversary bent on systematic global genocide.

After my recent review of Russell Blake’s superb ‘El Rey’ Assassin series, I was left hungry for more, so I gave serious consideration to 3 options, 2 of which had the potential to land me in seriously hot water:

First, as an obsessive fan, I could send Russell a cup of my blood.
Second, I could just sit at the end of his bed and watch him sleep.
Third, I could get stuck into his latest novel.

Fortunately for Russell, I chose the third option. Fortunate for me as well, as I don’t like needles, and plane tickets from the UK to Mexico aren’t cheap. (Also, it appears that Russell has upgraded his home security after the last time I tried to get in). Good job then that Russell had just released his new thriller, ‘Upon A Pale Horse.’

I set about that bad boy like Hannibal Lector on some liver with fava beans and a nice chianti. And what a meal it made.

Russell describes this as a ‘bio thriller’ – in my mind I had visions of a zombie plague being unleashed on the world and man’s fight for survival. That would have suited me down to the ground as I’ve been an avid Walking Dead fan from day one and have since discovered a thriving and very well written zombie apocalypse genre (often referred to as ‘zom-poc’), as well as legions of like minded geeks who I can relate to perfectly.

Fortunately for avid readers and CrimeBookJunkies, Russell is much more of a grown up than I am, and he has given us a gripping, well constructed thriller . . . but it is very different to his usual outing of fast paced action and adventure. Our protagonist in ‘Upon A Pale Horse’ is not a usual Russell Blake hero – he’s not a world renowned Mexican assassin, or an ex Mossad agent skilled in Krav Maga and close quarter combat. Our hero this time is Jeffrey Rutherford, a young lawyer who, even though good at his job, is still at the lower end of the company ladder and is aspiring to rise higher.

Jeffery’s brother is killed when his plane blows up shortly after take off, and when Jeffery goes to deal with his deceased brother’s will and estate he finds a message left for him which leads Jeffery to not only start a new life in a different part of the country, but to discover his brother’s life wasn’t quite what it seemed . . . and that leads Jeffery to take over his brother’s quest to stop a plot to unleash a deadly virus upon the world. And as in all good thrillers, the bad guys have Jeffery outnumbered, outgunned, outresourced and will do anything it takes to stop him.

Fortunately they don’t seem to have him outsmarted though.

Russell Blake and I have a few things in common. We’re both animal lovers and take no greater pleasure than rescuing an animal in need and giving it a loving home with a family who will look after it; we’re both devilishly good looking blokes, worthy of a second glance; and also, we seem to share a mutual distrust of our respective governments and a good old-fashioned dislike of politicians. Don’t believe me? Check out his Facebook posts and his author interviews. He talks sense. Remember that – good old-fashioned common sense? Probably because the older you get you begin to realise that common sense isn’t all that common.

Recent events in the UK have made me trust David Cameron and Theresa May as much as I’d trust a great white shark which hasn’t eaten for a week. Incidentally, did you happen to see Theresa May being interviewd by the BBC last week, when she was talking about the latest round of police cut-backs? The camera crew only filmed her from the waist up, probably because her pants were on fire. And if you ever read this review, Theresa, the tax paying British public prefer honesty – (personally I’m all for honesty in a big way, and to prove it I’d like to a see a pregnancy test commercial where two single people high five the shit out of each other because it’s negative, rather than the vacant, love-struck expressions on the faces of the models in the current adverts).

This novel had me hooked before I’d even opened the first page because of what Russell himself said about it during an author interview. He told the interviewer, “It’s the first novel I’ve ever considered not releasing. I agonized over it. I was afraid of the blowback from those aligned with Big Pharma or the government. Because they’re not going to like this book. At all. Especially if it gets people asking tough questions about a topic that has been closed to debate, the experts and the media all assuring us that there’s nothing to see here, and to move on. This novel, although fiction, is their worst nightmare, because it will force people to think, and that’s bad for any regime that depends upon the apathy of its citizenry.”

Good enough for me, as I was always the kind of kid who would do something just because the powers at be didn’t want me to. Sometimes you just gotta stick it to the man.

‘Upon A Pale Horse’ is ambitous as it’s not like his other novels at all which are, in the main, excellent action yarns. This book show’s Blake’s versatility, but I like to think maybe a bit more of his personality as well. It is clearly centred around an issue close to Russell’s heart, and conspiracy theory addicts will lap this one up. It’s much slower paced than his other adventures and is not dissimilar to John Grisham’s works in terms of content and style (incidentally, I’ll be reviewing Grisham’s latest offering soon, CrimeBookJunkies). In other words, it’s well written, with good dialogue, it’s cleverly thought out and with the all-important interesting characters. Add in a healthy dose of pandemics, viruses and the conspiracy theories to go along with them, and you’ve got another clear winner from the very talented Blake.

And if that doesn’t tempt you, CrimeBookJunkies, take this from the author’s note: “Upon A Pale Horse is without a doubt the most controversial novel of my career. The Afterword section provides a list of points that should be required reading for anyone who questions official explanations of the origin of global epidemics. It raises a number of disturbing questions that can’t just be waved away with glib assurances that “this has all been debunked.”

Another kick-ass review and a little insight into my guest reviewer.  I can vouch for his good looks (he pays me to say that), his love of animals and his distrust for politicians….but what he hasn’t told you is…hmmmm…maybe I will keep that one to myself! ?

5 Replies to “Upon A Pale Horse: Scottydog ~Guest Review~”