Oooooooh #bookjunkies!  You are in for a treat today!  The ever-so-unique and talented Scottydog has sent me a review!  Eeeeeek!  I seriously think he should consider writing his own book- he certainly has the imagination for it and his way with words is…..well…let’s just say, he ROCKS in my opinion!  Today Scottydog is reviewing The Last Refuge by Martin Roy Hill. No Assassins in sight, but rather an action-packed thriller to pique your interest!  Over to you Scottydog! 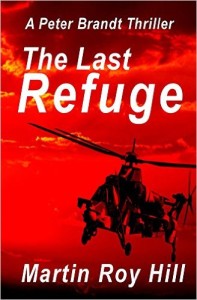 Iraq, 1991: Operation Desert Storm. In a terrible friendly fire incident, a U.S. helicopter massacres a small convoy of American MPs. Among the dead: a mysterious American civilian engineer discovered by the soldiers behind enemy lines.

San Diego, CA, 1993: A freelance journalist is hired to write a story about a wrongful death lawsuit filed by the dead engineer’s widow against the government and the defense contractor he worked for. The problem: the government insists the lawsuit does not exist, and the contractor claims the engineer did not work for them. Worse, someone is willing to kill to keep it that way.

Peter Brandt, the war-scarred journalist hero of Empty Places, returns in this story of greed, betrayal, and government secrets. Can Peter expose the truth without becoming another victim of the wartime tragedy?

It’s not my fault. I blame the script writers. I really do.

Thanks to TV script writers and their selfish ways, my family can no longer enjoy a police drama without me interrupting and mocking at regular intervals. I take no responsibility for my behaviour whatsoever.

“Ha!” I would exclaim as I lay reclined on my sofa with my head on one armrest, legs outstretched towards the other. I’d wave a Homer Simpson slipper-clad foot at the TV screen and say, “Absolute rubbish! That would never happen in real life! The police wouldn’t do that!”

Mrs Scottydog, who would be sat bolt upright on the other end of the sofa, wedged between my feet and the armrest, would tut and give me a look of disgust.

“Alright then, Sherlock, it’s just a bit of light entertainment. Don’t spoil it for the rest of us.”
“But it’s bollocks!” I’d persist, and would then recite a list of between 2 and 47 gross police-procedural errors that the TV show portrayed.
“Oh for cryng out loud,” the long suffering Mrs Scottydog would say, “It’s just a bloody TV programme. Besides, have you never heard the phrase, ‘Don’t let the truth get in the way of a good story?’ And will you get your feet off me so I can have some room?”
“I can’t move – the cat’s on me. Anyway, are you going to the kitchen?”
“I beg your pardon?”
“You know what would be really nice with this cup of tea?”
“The antidote?”
“No. A chocolate bisc – what did you say?”
“Nothing.”

I made the point in my CrimeBookJunkie guest reviewer greeting that I usually like to stay away from British crime thrillers . . .

. . . not just because I get a gut full of that stuff at work, but because, well, how do I put this? I find British police procedurals in literature and TV just a teeny weeny bit frustrating. Every time the main character turns out to be a DI or a DCI I do a kind of mental face palm and think to myself, ‘Another series set around a DCI. A DCI? Really? Sheesh.’

I just think that a little bit of authenticity goes a long way. If the main character is an over worked, under resourced, stressed to the max office dweller then by all means a DCI is the rank to go with. In reality it’s the DCs and DSs that do the investigating and the exciting stuff worth writing about. Just look at Caroline Mitchell’s DC Jennifer Knight series . . . there’s a reason why her protagonist is a DC. So yeah, I like a bit of authenticity in my thrillers, and I admire an author who clearly understands what he’s writing about.

‘I think this one might be more your kind of book,’ Noelle, who founded and runs CrimeBookJunkie, wrote to me in her e-mail. ‘Want to review it?’ ‘Sure,’ I thought as clicked on the attachment to Martin Roy Hill’s ‘The Last Refuge’ and sent it to my kindle. I hadn’t heard of Hill before, but I was willing to give his book a go as it indeed sounded right up my street. Strange, I can’t ever remember feeling grateful for being given homework before. The Last Refuge opens with a friendly fire incident during the 1991 Desert Storm operation in Iraq. A small convoy of US Military Police are escorting an American civillian they found behind enemy lines when they are killed by a US air strike.

Right from the word go this book had me intruiged, not because of the well written friendly fire opening scene but because of the dialogue – or more specifically, the military radio chatter. “Realistic,’ I thought – ‘Authentic. This guy Hill seems to know what he’s writing about. Perhaps he’s done his research?’ I pushed further on into the novel, becoming gripped the deeper I went.

The Last Refuge protagonist, Peter Brandt, is a war-scarred journalist hired to write a story about a wrongful death lawsuit filed by the widow of the American civillian killed with the MPs in the air strike. It’s not long before Brandt realises that some very powerful people will do whatever they can to make sure the story is not written – the file has been removed from the court and Brandt is stonewalled by everyone he turns to, including the government, the dead guy’s employer, court employees . . . and Marine Corps chopper pilots. I didn’t warm to Brandt initially, but as he went through his investigative process and his character traits came out I felt myself beginning to thaw. By the end of the novel I was firmly in the Team Brandt corner, selling t-shirts and Brandt merchandise. Hill made me feel that at any time Brandt was only a few Hush Puppies away from a good kicking, such was the determination of the bad guys to keep the truth under wraps. And he did it well.

The constant stonewalling of Brandt and the attempts at a cover-up had a distinct whiff of Dustin Hoffman and Robert Redford’s characters in the 1976 movie, ‘All The President’s Men,’ directed by Alan J Pakula (book by Carl Bernstein and Bob Woodward, screenplay by William Goldman). And that is no bad thing at all. And here’s a little bit of movie trivia for you, Crime Book Junkies – in ‘All The President’s Men,’ Frank Wills, the actual security guard who discovered the break-in at the Watergate complex, played himself.

The more I persisted with The Last Refuge the more I became curious about the author. Hill clearly knew his military procedure and relevant history and related topics. His knowledge of the Irag campaign and the then political situation seemed spot on, as did his knowledge of past conspiracies which were referenced, such as the infamous ‘October Surprise.’ (The October Surprise conspiracy theory involved an alleged plot to influence the outcome of the 1980 United States Presidential Election between Jimmy Carter and opponent Ronald Reagan. One of the leading national issues during that year was the release of 52 Americans being held hostage in Iran since 4 November 1979. Reagan won the election. On the day of his inauguration, in fact, 20 minutes after he concluded his inaugural address, the Islamic Republic Of Iran announced the release of the hostages. It was alleged that Reagan’s presidential campaign had conspired with Iran to delay the release until after the election to thwart President Carter from pulling off an ‘October Surprise.’ It was also alleged that the Reagan Administration rewarded Iran for its participation in the plot by supplying Iran with weapons via Israel and by unblocking Iranian government monetary assets in U.S. banks).

Author Martin Roy Hill has been a medic of one sort or another in three branches of the military. Most recently, as a medical service corps officer in a component of the California National Guard, he helped train combat medics for Iraq and Afghanistan. Hill also served as both a wilderness search and rescue medic and a tactical medic as a reserve sergeant in his local sheriff’s department, and an EMT on a federal Disaster Medical Assistance Team. Hill describes his current day job as a U.S. Navy analyst in combat casualty care.

Need any more authenticity? Well here it is – Hill spent more than 20 years as a staff reporter and editor for newspapers and magazines, before taking up the current day job. His freelance work is as extensive as it is impressive, and has appeared in credits Reader’s Digest, LIFE, Newsweek, Omni, American History, Coast Guard Magazine, Retired Officer Magazine, the Los Angeles Times Sunday Opinion Section, and many more. His short stories have been published in Alfred Hitchcock Mystery Magazine, ALT HIST: The Journal of Historical Fiction and Alternative History, San Diego Magazine, San Diego Writer’s Monthly, amongst others. Hill is also a professional member of the Mystery Writers of America.

As for Hill other novels, my advice is to check him out on Amazon. You won’t find a huge amount of his material there, and there aren’t that many user reviews . . . but the reviews which are there show that those who have read him have enjoyed him very much.

In short, I enjoyed the book. There was a lot going on in the story, all parts satisfyingly woven together. Twists and turns, all very well done. Who was the civillian killed with the MP’s? Was he CIA, and was he selling arms to the Iraqis? Was he specifically targeted, and why are people going to great lengths to keep the truth from emerging? The characters and their roles are expertly linked, without the author employing a clumsy but convenient coincidence. Gotta hand it to Hill – he can think up a good story. This book has me curious about the protagonist and I want to read the first Brandt novel, not just because I enjoyed The Last Refuge as a good read, but because I’m genuinely interested in Peter Brandt and what makes him tick. There were several references to his dead wife and his also dead pal, and experiences in war which have left their mark on him. But they were just references – nothing more. Stop teasing, Martin, this is only the first date.

So that’s my advice. Try Hill’s books and enjoy them. But to really make the most of his stories you have you look that little bit deeper than the character on the page and emerse yourself in the authenticity. This guy’s the real deal.

OK, CrimeBookJunkies, I have to bring today’s ramblings to an end as Mrs Scottydog has given up with the police drama on TV and is hopefully putting the kettle on. Judging by the frying pan which just flew past my head, I’ve done something wrong . . . can’t wait to find out what it is.

Well it looks as if Scottydog is in the doghouse!  Best find him some more homework to keep him busy!  I am a relentless slave-driver…as my Guest Reviewers can attest to!  Sounds like this book is well worth a read *she says adding to the TBR mountain accumulating on her kindle*  It is currently available for pre order, just click the link below!