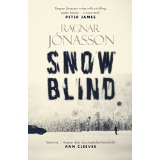 Siglufjörður: an idyllically quiet fishing village in Northern Iceland, where no one locks their doors – accessible only via a small mountain tunnel.
Ari Thór Arason: a rookie policeman on his first posting, far from his girlfriend in Reykjavik – with a past that he’s unable to leave behind.

When a young woman is found lying half-naked in the snow, bleeding and unconscious, and a highly esteemed, elderly writer falls to his death in the local theatre, Ari is dragged straight into the heart of a community where he can trust no one, and secrets and lies are a way of life. An avalanche and unremitting snowstorms close the mountain pass, and the 24-hour darkness threatens to push Ari over the edge, as curtains begin to twitch, and his investigation becomes increasingly complex, chilling and personal. Past plays tag with the present and the claustrophobic tension mounts, while Ari is thrust ever deeper into his own darkness – blinded by snow, and with a killer on the loose.

First and foremost I need to thank one of my #BloggingBFF’s Kate Moloney of BibliophileBookClub as she swooned…yes swooned …over this book ~ well both of Ragnar’s books actually~ so relentlessly that I just had to give it a read!  And now…I think I am swooning just a little bit too! ❤️

Snow Blind is the debut crime thriller from Ragnar Jónasson and part 1 of the #DarkIceland series.  This book is ensconsed in mystery from the start.  The feeling is ever present as you turn the pages and learn a bit more about the chracters, setting and plot.  What I loved about this book was the actual mood it put me in.  I am a visual reader…which can be scary at times considering the types of books I read!  Not this book though, despite the murders, I just felt…enraptured almost.  The words sung off the page and I totally fell in love with Iceland.  The scenery descriptions were eery yet absolutely enthralling.  Talk about being “snow blind”!  Perfect title…sheer perfection!

The remoteness of the village is obvious throughout and poor Ari…leaving one life behind to start another.  You really feel for this guy!  He is literally trapped, in more ways than one and is left trying to solve not one, but two murders in a village where the only suspects are the villagers themselves.

The village/villagers are full of secrets and lies and Ari struggles to know who he can trust…now that would be scary!  I was reminded, when reading this book, of those old ‘whodunnit’ or murder mystery type books…but this one was brought to the 21st century…same feel, different era.

If you are looking for a fast-paced thriller, this book may not be your cup of tea ~ however, if you want to experience an eery, suspenseful, isolated, chilling and beautifully written crime novel…then please, fall in love with Scandanavian Noir and get reading Snow Blind!

Luckily, the lovely Karen Sullivan of Orenda sent me a copy of Night Blind, the second in the series, so I can carry on my love affair with Iceland! *Swoon* ?

One Reply to “Snow Blind ~Review~”