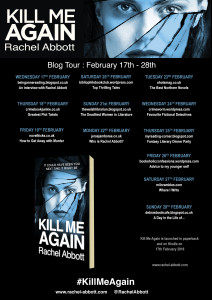 Absolutely over the moon to be part of Rachel Abbott’s Kill Me Again Blog Tour.  Rachel has provided CrimeBookJunkie with an interesting and exciting write up about her Top Five Plot Twists.

I am often surprised by how few books actually have plot twists, and for me, as a writer, thinking of the twist is one of the most exciting aspects of constructing the story. But they have to be credible. There is nothing worse than a twist that confuses everybody because not only did they never see it coming (which is as it should be), but when they think back over the book, there were no indications at all. To me, the best twists are when you are staggered by the turn of events, but when you go over the story in your mind, you realise that there were tiny hints all along. It keeps you thinking about the book long after you have finished reading.

Finding my favourite five therefore wasn’t as easy as I thought it would be, but one or two of these are brilliant. However I don’t want this to be a list of spoilers for five great books, so I’ve had to be careful how I have phrased my thoughts.

Gone Girl – Gillian Flynn – I loved the book and the film, which is unusual for me, because when I’ve enjoyed a book I rarely enjoy it on the big screen. The tale of a difficult marriage comes to a head on the couple’s fifth wedding anniversary when Amy leaves Nick but not by packing a suitcase and leaving a note. She goes missing and one of the best twists in fiction starts with Nick being arrested for her murder. I can’t say more – but it is in the final moments of the story that you realise the depths of the plotting on behalf of one of the characters.

Presumed Innocent – Scott Turow – This story of a prosecutor charged with the murder of his colleague was written in the first person so we get to see Rusty Sabich – the person initially accused of killing his former lover – work out who the murderer was and what the heavy ‘unknown object’ used was. The evidence planted to seal his fate was as original as it was disturbing and brings new muscle to the idea of a woman scorned.

Rebecca – Daphne du Maurier – This is my favourite book of all time. The ending more than anything else reveals why the book is called after its dead character. She haunts the book and the people in it and when the much loved and admired Rebecca is exposed as a taunting, hateful manipulator it’s wonderful to discover what a master of her art she was and find out what really happened to her.

Tell No-one – Harlan Coben – This was the first Harlan Coben book I read, and I went on to read them all. I like the fact that his stories – like mine – are mainly told from the point of view of the victim or the perpetrator of the crime, rather than from solely the point of view of the police. Tom Douglas in my novels does steal some of the limelight, but my books are essentially about the people who are in jeopardy. Coben’s standalone books are similar in that respect. In Tell No One a grieving widower receives a message eight years after his wife’s death – a message that only he and he wife would understand. Is she or isn’t she dead? As if in a dream or a nightmare, Dr David Beck sets out to find out what happened to her, and uncovers a complex, twisting tale of deceit from the most unlikely sources!

Atonement – Ian McEwan – Lives can be changed in a minute and lives can be ruined in a minute. No book drives this message home better than Atonement. A girl’s half-innocent mistake leads to the downfall of her sister and her lover. We get to see them have their life together in difficult circumstances and enjoy a sense of relief that they at least were together. But the postscript changes that and the tragedy that three lives have been blighted stays with the reader for a long time. It is a most unexpected ending, and whilst I would never classify it as a crime novel, there are many aspects similar to a thriller – a terrible set of circumstances and the impact of choices that people make.

I have read four of those books and would have to say I totally agree! I have included a few links below to connect with Rachel and must say, you need to check out her books!  Stranger Child would definitely be on my top 5 plot twist lists!  Oh and pop over to  My CBJ Twitter Account for your chance to win a prize!  Just look out for this tweet:  “Let me know your favourite book with a twist, for a chance to win a copy of #KillMeAgain and a bag!”  or leave a comment below and I will choose a winner tomorrow eve!

A big CrimeBookJunkie thank you to Rachel –make sure you check out the rest of the Kill Me Again Blog Tour #bookjunkies!!