Today my Guest Reviewer, the lovely Claire Knight, and I are excited to be hosting and being the FINAL stop on Rob Sinclair’s Hunt For The Enemy Blog Tour!

Rob has provided CrimeBookJunkie with a brilliant write up on his Writing Journey So Far….

With my third book about to be published I should firstly state that my writing journey is still very much ongoing. In fact in many respects I feel like it’s still right at the beginning. And yet my journey has already changed me and my life so much.

I came into writing with my eyes wide open. A complete novice not just at writing but in the many nuances of publishing and marketing books. I still have a lot to learn, I’m sure, but I’ve also now got a solid base behind me that I know I can replicate for each new book that I release in the future. So just how did this journey start for me? And what have been the key highlights and lowlights thus far?

One thing that fascinates me about writer’s is that the stories of how people came into the craft are so wide and varied. Yet I still see my route to writing as somewhat unusual. By the age of 28 I had never once in my life considered writing a novel. I was newly married to my wife who I’d met several years earlier when we both started work at the same global accountancy firm on the same day. We were still both working for that firm, both seen as high flyers in our respective departments. We commanded very respectable salaries for our ages, had just bought our first house in a leafy suburb of Birmingham and each drove a shiny new executive car. I wouldn’t go so far as to say anything was missing from that life, when I look back we were both very happy, if a little overworked, but then who isn’t? Yet when the writing bug suddenly took hold, my outlook on life really did forever change.

It was on a holiday in Spain when the idea of writing came to me. Having read a number of books in quick succession (our holidays back then really were quite simple – just lazing by a pool day after day drinking beer and wine and eating nice food!) and not being particularly impressed with any, I’d said to my wife, quite flippantly, that I thought I’d be able to write a book too. Yes the comment was flippant. But actually I was entirely serious. I’m a very competitive person, even with myself. And once that marker had been set, I really had to try and see it through. And I mean, why not? I’d never tried writing before, I’d never thought about trying it, but how else do writers find out if they can do it unless they try?!

So from that day I began thinking out in my head just a very simple scene. Going over some of the sentences in my head again and again. Then when we were home I wrote it out. A basic couple of pages. I slowly fleshed that out and after a few weeks showed it to my wife. I half expected her to tell me how rubbish it was and to get back to the day job. But she didn’t. She said it was ok and perhaps I should keep going. So I did.

Fast forward 6 years and my third book, Hunt for the Enemy, will be released on 11th February. And what a roller coaster ride it’s been in between.

Back in those early days I was squeezing my writing in between my full time job; early mornings, evenings, weekends. On finishing the book I promptly began sending it out to agents here there and everywhere. My first big mistake. I got roundly rejected. What can I say. I was naive and didn’t know better. Then I slowly began to edit and re-edit the book, sending out more submissions every so often. And I carried on getting rejections, albeit some of them were now becoming more personalised at least!

But everything really came to a head late in 2010 when my first son was born. All of a sudden my world was turned upside down. And gone was all that spare time I never properly cherished! My writing ground to a halt. I still continued to do some editing here and there but it came to the point, a couple of years later, when my second son was born, when I very nearly gave up altogether. I was getting nowhere fast with the book and just didn’t have the time to make any real headway.

I was at a crossroads. And there wasn’t much in it as to which direction I took. Ultimately, with a push both from my wife and my parents, I took the decision to go ahead with self-publishing the book. I’d done the hard work in writing the damn thing (or so I’d thought), so why not at least give it a go?

That was when I made one of the best decisions of my writing career and one I’d recommend every writer do before they ever send out submissions or self-publish. I hired a professional editor. She was brilliant. Not only did she really help me to develop and polish the manuscript but she opened my eyes as to some of the flaws in my writing, my plotting, the whole set-up of my books. Things which seem so obvious to me now that I just didn’t know back then. And then I bought myself the other thing I desperately needed. Time. I took a 6 month sabbatical from my demanding full time job. During that six months I laid all the preparations for release of Dance with the Enemy as well as finishing my draft of Rise of the Enemy and getting that edited. And by the end of the sabbatical I was a fully fledged published author!

That might have been the end. I’d done what I set out to do. What I’d betted I could do by the pool all those years ago. I’d written a book and it was out there for the world to see. I could have stopped then. Gone back to my normal life. Carried on climbing the corporate career ladder.

But I wasn’t done. The writing bug just wouldn’t let go. So a year later I’d walked away from that corporate career altogether. It’s still a big shock to the system when I think about that, but it was the right decision, I firmly believe. I love writing, and it suits me. I like being in charge of my work. I like being at home and getting to spend time with my boys. It takes a lot of pressure off me and my wife as a couple compared to before when we both were forever neck deep in problems with our demanding full time jobs. That’s not to say it’s all fun and games. Being an author, I’ve realised now, particularly a self-published author, is far more than just writing books. I’m a sole trader. An entrepreneur. A large chunk of my working week is devoted to a myriad of strategies for marketing and promoting my books because one thing is for sure; they don’t sell themselves. Not in the start at least. But all that effort has been worth it. 100,000 copies of the first two Enemy books have now been sold and I would have chewed your hand off two years ago if you’d handed that prospect to me. With Hunt for the Enemy I’m hoping for an even bigger splash. I’ve certainly put the effort in building the foundations. And there’s plenty more left in me yet. Like I said, this journey has only just started…Onwards and upwards!

Wow!  Thanks Rob!  Though I had kind of hoped to read that you had been living on the streets, with your blind dog…struggling to make a living…when that eureka “I am going to be a writer” moment struck….guess you will be buying us all Champagne at the next Author/Blogger event!  Yay!

So now, why don’t we find out what Claire thought of the final book in the #EnemySeries!  Over to you Claire! 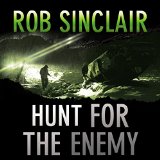 The breathtaking and action-packed finale to the bestselling Enemy series. The Hunt is on. They’ve erased his past. Wiped out his very existence. But Carl Logan isn’t finished yet. On the run in a harsh Russian winter, Logan – once an invaluable asset but now branded a traitor – has been framed for murder. His own firm, the secretive Joint Intelligence Agency, have labeled him a rogue operative after two decades of loyal service. The agency is hunting him down… and they’re not the only ones. But there’s much more at stake than just Logan’s life. One by one, agents and informants from all sides, all allegiances, are dying. And Carl Logan is the only man who can put a stop to it, once and for all.

Logan is back and this time it is personal!! He’s been betrayed by anyone and everyone and he’s realised “the enemy of my enemy is my friend”.

Hunt for the Enemy picks up where Rise of the Enemy left off with Logan on the run from the various security services in a rather chilly Russia. I felt cold reading in during a remarkably mild February. The chase continues around Eastern Europe and beyond. But we also see a bit of Logan’s history, the people who have trained and influenced him and the events that have shaped him.

This time round, things are getting tighter for Logan and just when you think the game is up for him, like a magician he pulls something out the bag.

I’m not a huge fan of spy thrillers but the Enemy series have been a fantastic set to read. Rob Sinclair’s writing draws you in so you feel you there with Logan whether it’s central Paris or deepest darkest Siberia! I was willing Logan to succeed at every turn, to find the Enemy! Hunt for the Enemy is a spectacular finale to the trilogy!

Thank you to Rob Sinclair for sending me this ebook to read and review.

WOW!  What a way to end the tour!  A 5⭐️ review!  Thanks so much Rob for giving CrimeBookJunkie the opportunity to read/review your books!  I have these on my TBR to read too!

Grab yourself a copy from the link below!