For the last few days, I have been setting some teasers over on my Facebook page and Twitter account!  The big reveal has finally arrived!!  I was over the moon and absolutely honoured when the lovely J.M Hewitt (I call her Jeanette…because …well that is her name and she lets me! LOL) contacted me and asked if CrimeBookJunkie would like an exclusive.  The “Hell Yeah” could not get out of my mouth quick enough!  I have also been given an excerpt to share and this book is one I am dead excited about!  So without further ado…and also because I am just so damn excited…here it is…Exclusion Zone…

On 26th April 1986, reactor four exploded at the factory in Pripyat, Chernobyl. At the same time teenager Afia Bello vanished from her home without a trace.

The damage from the nuclear fallout is examined over the following weeks, months and years by Afia’s younger sister Sissy, as she unwittingly uncovers clues relating to her sister’s disappearance, and the secret life that Afia kept hidden from her family.

In the summer of 2015 Private Detective Alex Harvey is hired to investigate the disappearances that have been occurring within the exclusion zone. He can think of only one person to bring along with him to help; Ukrainian national Elian Gould.

Elian – who was adopted at birth – has her own reasons for accepting the job; namely to search for her own family history which has always been a mystery to her.

But the remaining citizens of Chernobyl are hiding their own secrets and with a darker force at work, the missing person’s case suddenly turns into something much more serious. 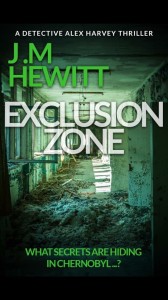 Now I see the smoke. It billows through the night sky, casting a shadow across the moon.
“Father?” I clutch Afia’s arm.
“He’s gone to the factory to see if he can help,” she replies, as she struggles to open the window.
I pull her back, worried that if the window is open all that black smoke will engulf our room, drag us down, and swallow us whole with the noxious gas. “Don’t open it, Afia. Come away from there.”
But Afia swats me away like an irritating fly and moves towards the door. She pauses, her hand on the door knob and, with her back to me, she speaks.
“Look out for mama; she’s going to need you, Sissy.”
*
These days, almost thirty years after that night, I go over those words time and time again. When I used to hear sirens, which was most days and nights when I lived in London, my heart would race and I would hurry to a window to seek evidence of a burning building or a national disaster. Even when the sirens faded away I’m there, stuck in 1986 in my town of Pripyat. I’m watching the nuclear plant burn and only half listening as my sister says her goodbyes. If I had have known that they were the last words she would ever speak to me, I would have listened a lot harder. 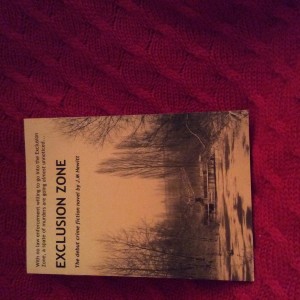 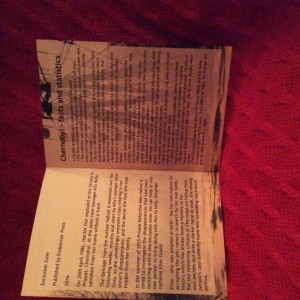 Thank you SO MUCH Jeanette for allowing my little blog to feature an exclusive of your upcoming debut crime fiction novel ~ Exclusion Zone.  It is definitely going to be added AND BUMPED…on my TBR as I look forward to reading this beauty!  Watch this space and my Facebook page bookjunkies as I will be keeping a close eye on publication dates and sharing!