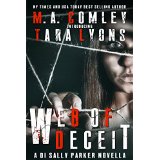 DI Sally Parker is called to one of the best hotels in the area after one of the guests, Megan Carmen, reports her friend, Tina, missing.

Sally investigates Megan’s background when the woman reveals that she has just arrived from France and Tina is a woman she met on the Internet. Do genuine people truly arrange to innocently meet people they’ve only just met online? Or, in light of Tina’s disappearance, is there something far more sinister afoot?

I was given this book by the authors in exchange for an honest review.

I was dead excited to hear that Tara Lyons had collaborated with the fabulous Mel Comley (M.A Comley) on this novella and I knew that I would be in for a treat!  What a great little read it was!

The characters of Megan and Tina immediately had me thinking of both these authors and I was curious as to how much of themselves had been injected into the creation.

The storyline was clever.  I had thought at times that I had figured it all out but was pleasantly surprised at the end when all was revealed.  There were some good twists which made it all the more interesting and certainly kept me hooked.  I easily read this novella from cover to cover.  I liked the premise of how the lies that formed the basis of the story were all intertwined and not easily unravelled.

It did seem ages, however, before DI Sally Parker made an appearance which is not usual.  Although it fit the story and she and DS Jack Blackman (LOVE HIM) did capture my interest — I just wish they had been in the story from an earlier stage.  Oddly, I was waiting for Carol (from the Justice series) to show up too!  Shows how much I love Mel’s books!  I want all the characters to mix and mingle like one big Justice/Parker series party!

What a great way to introduce Tara Lyons as a debut author too!  I am certainly looking forward to seeing what Tara’s full novel will have in store for us if this was just a taster.  And the cover…well..it is another winner!

So for a great little DI Sally Parker “fix” I would certainly recommend you get your hands on this book as you will easily read it in one sitting!  Well done on another fab instalment of the DI Sally Parker series.  I am looking forward to the next in this series.  Click the link below to purchase a copy of this fab book which will be available January 20th!