I tell you what #bookjunkies, I have been waiting (not so patiently, right Scottydog!?!) for this review to land in my inbox and it FINALLY arrived this evening.  After reading this review, I think I need an Assassin in my life!  So here it is, Scottydog’s unique thoughts on Russell Blake’s Assassin series…. 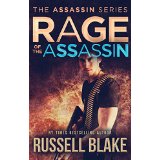 In the final installment in the bestselling Assassin series, El Rey and Captain Romero Cruz race the clock to stop a terrorist threat to Mexico City and save thousands of lives. Gritty, unflinching, with a plot drawn from today’s headlines, Rage of the Assassin concludes the saga that began with King of Swords

Question for you, fellow readers: does it count as saving someone’s life if you merely refrain from killing them yourself?

This is the question I was mulling over recently as Sleazy Jet brought me back to Blighty after spending two weeks languishing under the Spanish sun. Just a few days before, I was on a sun lounger by the pool when quite possibly the worst family in the UK decided to pitch camp not ten yards away. The impressiveness of the father’s beer belly was surpassed only by his England football vest, the cartoon British Bulldog adorning his left calf, and the Milwall FC crest with a St George’s Cross background on his right. The high pitched screeching of the two children was only drowned out by the mother’s screaming at the father and her periodic demands of him to, quote, “Sort your blaaady kids aaht, Wayne!” Wayne’s attempts to sort the ‘blaady kids aaht’ were futile and I formed the impression that only a significant act of violence would stop them from acting like little feral animals and ruining my holiday. The noise coming from the four of them combined managed to overpower anything my Ipod could blast into my ears, and judging by their accents the father was from London, the mother was from Essex, and the children quite possibly from the depths of hell.

With pool-side space at a premium, options were limited. Thankfuly the first option I picked turned out to be the right one. With my Ipod turned up to the max and my ear drums bleeding, I started reading Russell Blake’s superb ‘Rage Of The Assassin.’

This started of as a single book review, but how do you effectively review the very last book in a series of six without discussing or having reviewed the others? In my defence, I didn’t know Noelle and hadn’t been invited to ride the CrimeBookJunkie Express when I was reading the other Assassin books. So consider this a review not only of Rage of the Assassin, but the whole series.
El Rey, the main character in Russell Blake’s Assassin series, is a cold blooded killer and assassin operating in Mexico. Many of us Brits think of Mexico as a far away exotic holiday destination, but two weeks on a beach in Cancun or Puerto Vallarta won’t show a tourist the real Mexico, a country suffering horrific violence and corruption due to the powerful drug cartels. The drugs exportation business in Mexico is a multi billion dollar industry, generating more money than the GDP of some countries. It is estimated that about 8000 people a year die in Mexico due to drug cartel related violence. El Rey operates against the backdrop of this culture and industry, bringing him into conflict with the cartels, the Federal Police and CISEN (Mexico’s intelligence agency).

Despite El Rey being a criminal and cold blooded killer, the reader soon takes his side and begins rooting for this brilliantly portrayed anti-hero. This protagonist (if indeed you can call an assassin such) is a welcome change from the usual namby-pamby, blue eyed, do-gooding ex special forces operator who would sacrifice himself for others and ask for nothing in return. I love an anti-hero more than I love a normal, run of the mill protagonist. You want to see a human side to them in order that you gel with them, relate to them, without them being a boy scout who couldn’t possibly do wrong or kill. And on occassion, El Rey does seem to have a very brief flicker of human emotion . . . just to remind us that despite his actions and astounding capabilities, he is indeed just that – a human being. In the series El Rey is pitted against both the cartels and the police, but would work for either depending upon the situation, and things start to get every interesting when he has little choice but to form an uneasy alliance with over worked and long suffering police captain, Romero Cruz.

Truth be told, I’d never heard of Russell Blake two years ago, and I stumbled upon him by chance. I’d just watched Fred Zinnemann’s utterly superb film adaptation of Frederick Forsyth’s ‘Day Of The Jackal,’ and I was looking for some good assassin novels to Kindle the time away whilst on holiday. I simply typed ‘assassin’ into the Amazon kindle search bar, and hey presto – I was introduced to Blake’s take on the genre, and someone who has become one of my favourite characters of modern fiction.

From speaking with like-minded crime / thriller book afficionados, as well other guys like me who have reached their 40s but simply haven’t grown up in the slightest, not too many British readers are familiar with Blake and his superb yarns either. That’s a shame as it means that many readers this side of the pond are missing a treat. Blake’s credentials are as impressive as his storytelling – he has featured in The Wall Street Journal, The Times, and The Chicago Tribune. He is the bestselling author of over thirty books, both fiction and non-fiction, and he has collaborated and co-authored with the famous Clive Cussler. That might be impressive, but in my view Russell deserves recognistion in his own right. Russell’s website has full details of all his books, as well as some interesting blogs and it also shows him to be the animal lover and dog rescuer that he is. Check him out at russellblake.com, but for the love of all things holy, don’t get him mixed up with the similarly named UK website ending in .co.uk or you will be faced with bespoke kitchens and furniture at absurd prices.

It turns out that I’m not the only one who holds Russell’s El Rey assassin series in high regard, as a quick trawl through the purchaser reviews on Amazon found readers using phrases like ‘creative brilliance,’ and ‘another knock out book.’ The reader who wrote, ‘the assassin series is without doubt a great work of fiction, dark with intensities and nail biting drama,’ was spot on with that description, and Shaz1998 who used the review section to ‘wish the most AWESOME sister in the world a totally fab birthday, lol,’ needs to stop confusing Amazon with the turgid mire known as Facebook (but she did give me a good laugh).

Trust me, fellow readers, I was more surprised than anyone when Noelle asked me to be a guest reviewer on her website. Even though I’ve always been passionate about books, movies and music (in my mind the three are inextricably linked) I had no clue about writing reviews – almost like the old addage, ‘I don’t know much about art, but I know what I like!’

So like an un-supervised, spotty 13 year old adolescent in search of his first glimpse of the female form, I turned to Google. Before becoming waylayed by funny cat videos and some quiet Facebook stalking I read a very good ‘how to’ blog which advised the aspiring book reviewer to consider how the book made him feel. How did reading the Assassin novels make me feel?

OK, so here’s the thing – reading any of Blake’s El Rey assassin books made me feel like watching Die Hard on DVD. Die Hard is a well written and executed action romp which hurls you forward at a very fast pace, leaving you a little bit breathless, immensley satisfied and ultimately wanting more. (And while we’re on the subject, Christmas just isn’t Christmas until I’ve seen Hans Gruber fall from the top of Nakatomi Towers – Yipee Ki Yay, Book Lovers!) And that’s exactly what Blake’s Assassin books are – extremely well written, full of action which does, admittedly, touch on a bit of nasty stuff, but then again we’re talking about the actions of barbaric drug cartels, so how could it not? But thanks to Blake’s talent and creative hand, it’s very well done and helps to make the superb series what it is. El Rey’s exploits are fast paced, violent, enthralling and, for me, the best sort of escapism there is from daily life.

But that’s not all. I was really disappointed when I read that Rage of the Assassin will be the last in Blake’s El Rey assassin series. Russell Blake has earned a well deserved place in my ‘top 10 favourite writers hall of fame,’ and El Rey is firmly cemented in my top 5 favourite characters of modern literature. The guy simply rocks, and I’m genuinely really disappointed that we won’t be allowed to join him on any more exploits and adventures (legal or otherwise!)

So well done for saving the lives of one of the worst families that Britain has to offer, Russell . . . bring back El Rey and you never know, the life you save might be your own. Yipee Ki Yay.

Wow!  …just WOW!  Thanks Scottydog…I now have to add these books to my ever-growing, mahoosive To Be Read list!  Below is a link to Russell Blake’s amazon page where you can purchase the whole series!