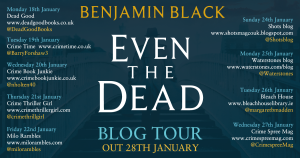 A big thank you to Benjamin Black and Penguin Random House UK for asking me to be a part of this blog tour! I was also provided with an ARC and my review is at the end of this post.  The author himself was kind enough to do a short Q&A with me so why don’t I start with that! 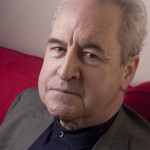 1. What would you say stands out the most in Even The Dead compared to other books in this series?

Well, Quirke does fall in love, really in love, for what seems to be the first time in his life—and the person he loves is a psychiatrist, just what he needs. Of course, the protagonist falling in love is not supposed to be the point of a crime novel, but I don’t really think of the Quirke books as crime novels. Certainly, there’s usually a crime, but usually the crime is the least of it.

2. Why did you choose a pathologist as the main, lead character rather than the traditional detective for this genre?

I’m afraid I can’t remember. I know I wanted someone for my main character who would be the radical opposite of the likes of Sherlock Homes and Hercules Poirot—Quirke wouldn’t recognise a clue if it bit him, and as far as I can remember he has never got his man—but somewhat like the greatest private investigator of them all, the ever-lonely, ever-jaunty Philip Marlowe.

3. What sparked your interest in writing?

You mean writing in general, or writing crime fiction? As to the first, I read Joyce’s Dubliners when I was very young, and was astonished to discover that a book could be about life, life as I knew it, and not just the Wild West or British public schools; that was when I determined to be a writer. As to the second, ten years ago or so I began to read Georges Simenon—some of the Maigret books but mainly what he called his romans durs, or hard novels—and was captivated. If one could produce books of that quality in the crime fiction genre, I thought, then I shall try my hand at it. I’m still trying.

I decided to use a pen-name simply so that my Banville readers would not think I was playing a literary game with them by writing crime fiction—with BB, what you see is what you get, and vice versa. Who is Black? Certainly he is not me—but then, Banville is not me, either. Those two fellows cease to be when I—whoever ‘I’ might be—stand up from the writing desk at the end of the working day.

5. What can we expect from Quirke in the future?

I shall have to go back and find out how Quirke manages with the love he has fallen into. Also, I am strangely fond of Quirke’s daughter Phoebe; my agent Ed Victor says I’m in love with her, but I rather think that Phoebe is me . . .

Loved that!  Thanks so much Benjamin or John..or whoever you may be at this moment!  Now for my review…. 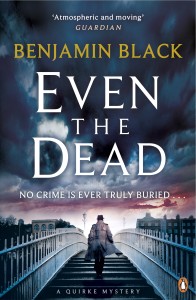 NO CRIME IS EVER TRULY BURIED…

Visceral, gritty and cinematic, Even the Dead is the latest stylish thriller from John Banville’s crime-writing alter ego, Benjamin Black.

Pathologist Quirke works in the city morgue, watching over Dublin’s dead. The latest to join their ghostly ranks is a suicide. But something doesn’t add up. The victim has a suspicious head wound, and the only witness has vanished, every trace of her wiped away.

On the trail of the missing woman, Quirke finds himself drawn into the shadowy world of Dublin’s elite – secret societies, High Church politics and corrupt politicians. It leads him to a long-buried conspiracy that involves his own family. But it’s too late to go back now…

THE DEAD WILL BE HEARD

I received this book from Sara D’Arcy/ Penguin Random House UK and the author in exchange for an honest review.

I have to be fair and say that from the start, I got the feeling that I was missing out on something, having never read any of the the other books in this series.  However, my curiosity got the better if me and although I struggled initially, I persevered and was very glad that I did.

There was a gradual build up of mystery and suspense ~ almost like the reader is being teased.  To me, it felt like the author was playing a game of sorts, rather than throwing everything into your face all at once, we are given a subtle trail to follow which ultimately led to the killer and a very clever ending in my view! <no spoilers though, you will have to read the book yourself to find out>

Quirke himself, is well…kind of quirky.  I found there was an air of mystery surrounding him and I am curious if that was just in the context of this book or whether this can be felt in the other books in this series.  A semi reformed alcoholic who happens to fall in love.  What I liked about this story is that although a murder was committed and an investigation follows, you are inadvertently drawn into a love story of sorts…but not a mushy, it-is-way-to-in-your-face type of love…no, it was kinda sweet! OMG -Did I just say the “S” word!?

Quirke is also quite reflective, but seems to be fighting an inner turmoil…which I found quite endearing.  And Evelyn Blake…..well I adore her!  Confident, sassy and too old to play games…yep..I like her character!  She feels real!  Quirke’s daughter Phoebe also features quite a lot within the pages and her strange relationship with her father unfolds.

I also felt there was something haunting about this read.  I cannot quite put my finger on it…but once I got over my initial struggle…I could not put it down.  Politics, revelations, secrecy, redemption, love and even justice is what you will find within this story.  Will I read any more in this series….I think you will find I have already added a few to my TBR pile!  Definitely interested in learning more about Quirke!

If you want to check out a crime series with a twist, click the link below:

One Reply to “Even The Dead Blog Tour”