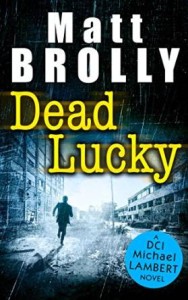 DCI Michael Lambert is back…

When a woman is murdered, the twisted killer forcing her husband to watch her slow and painful death, DCI Michael Lambert knows that his next case might be his toughest yet.

And when a second set of killings are discovered, with exactly the same MO, the race is on the find the lethal sociopath before he strikes again.

But Lambert never expected to receive an anonymous call from the killer. This time, it’s personal: if Lambert doesn’t find the murderer soon, his own loved ones will be next…

I received this book as an ARC from the author in exchange for an honest review.

As the synopsis states, DCI Lambert is back…and boy was I glad when I received the ARC of the beauty!   The first words out of my mouth when I finished this book were Oh-My-Friggin-God — this book ROCKED!  Was I surprised?  Not really — as when I read Dead Eyed (the debut) I knew DCI Lambert would be one of those series that kept getting better …and it does!

Trouble seems to follow DCI Lambert and Dead Lucky was no exception!  The book starts with a little catch-up following the SoulJacker case (still love that name for a serial killer!) and Lambert is back at work with Tillman at the Helm.  I really enjoyed getting to know the Team but also pleased to see Lambert still had that renegade streak.  I love a Lone Wolf!!

What I also liked about this book was the fact that we got to know a little bit more about Lambert’s character, without it turning into one of those “woe is me, I am tormented by demons” stories.  We have all read them – where that aspect can be over-used so much that you actually forget about the main plot and become ravelled up in a series of character development.  Needless to say, Brolly’s brilliance as a writer shines through and the focus of the story remains paramount throughout.  I am, however, still very intrigued by Lambert’s illness and wonder if this will land him in another difficult predicament in future cases.

In terms of the other characters which stood out for me — well DS Matilda Kennedy was a bit of a mystery.  No spoilers, but I am still not convinced I trust this one…and Lambert would be wise to do the same!  And Tillman –WTF is he about!!  Another one to watch indeed.  I was a bit gutted that DI Sarah May was not in this book more as I loved her in Dead Eyed — but I am hoping that is because she may feature more in Book 3 — hint hint Mr Brolly!!!  Walker also stood out for me.  He was arrogant, a bit up his own arse and behaved liked a stroppy child when he didn’t get his own way–I nearly said “typical man” there –but held back…ahem…sort of! #MyBad! .

A variety of emotions ran through me while reading this book,  I was #DeadImpressed with the fast paced plot; #DeadCurious about who The Watcher was; #DeadImpressed the author managed to fool me; #DeadSurprised when the killer was revealed and felt the ending was…well…#DeadPerfect!!

If you have to ask me if I would recommend this book, I would suggest you read my review again as it is a massive HELL YEAH from me!  Carina UK, Brolly is a keeper!! Do not let this guy go!  Clink the link below to pre order for release on January 11th 2016!!