Heeeeeee’s back!  Scottydog has sent in his first “official” CBJ review and it does not disappoint!  His unique style of writing/reviewing is something I am very pleased to have on my blog. Hope you enjoy it as much as I did!  So without further ado…. 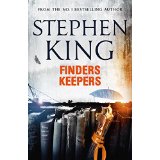 Wake up, genius.’ So begins King’s instantly riveting story about a vengeful reader. The genius is John Rothstein, a Salinger-like icon who created a famous character, Jimmy Gold, but who hasn’t published a book for decades. Morris Bellamy is livid, not just because Rothstein has stopped providing books, but because the nonconformist Jimmy Gold has sold out for a career in advertising. Morris kills Rothstein and empties his safe of cash, yes, but the real treasure is a trove of notebooks containing at least one more Gold novel.

Morris hides the money and the notebooks, and then he is locked away for another crime. Decades later, a boy named Pete Saubers finds the treasure, and now it is Pete and his family that Bill Hodges, Holly Gibney, and Jerome Robinson must rescue from the ever-more deranged and vengeful Morris when he’s released from prison after thirty-five years.

Not since Misery has King played with the notion of a reader whose obsession with a writer gets dangerous. Finders Keepers is spectacular, heart-pounding suspense, but it is also King writing about how literature shapes a life – for good, for bad, forever.

Butch Cassidy and the Sundance Kid is my benchmark movie.

Classic Newman, Redford and Ross, with a guest appearance by the Bolivian army. No, its not my favourite movie, and I don’t consider it the best movie of all time, but it is my benchmark. I was a spotty young 13 year old in 1986, and liking Butch and Sundance when everyone else was into Top Gun and Dirty Dancing was a bit like having a secret crush on the stern maths tutor whilst the rest of your pals were getting hot and bothered over the cute new languages assistant from Barcelona.

My theory is this: if they can produce a film like Butch and Sundance in 1969, with great action, amazing cinematography, superb direction, fantastic characters and genuine wit and humour, then what’s the excuse for some of the stuff that is churned out today? (Ironically, the only way you’d get me to watch Fifty Shades of Grey is if you tied me to a chair and forced me to).

Butch and Sundance is the benchmark that films I watch have to try to reach, and to be fair, many of them do. So it’s the benchmark, but NOT my favourite.

When it comes to books, Stephen King is NOT my benchmark writer. No siree. That just wouldn’t be fair on everyone else. He’s just too damn good at his trade. He’s the Spielberg of story telling, as he has been for decades now, and expecting most others to hit that standard is, in my view, unfair and unrealistic. That’s not to say he hasn’t written the odd lemon or two (Lisey’s Story, anyone? And there’s no way I could even get close to finishing Gerald’s Game), but in the main King is ranked right up there as one of the undisputed heavyweights.

‘Finders Keepers’ sees the return of the old crew which helped make the excellent ‘Mr Mercedes’ a hit. The basic premise of the story is not a new one. We’ve all seen it countless times before in movies and literature. The protagonist, in this case young Pete Saubers, finds something which does not belong to him, decides to keep it for himself, and wonders why the original baddie ‘owner’ goes medieval trying to get it back. So bring on the conflict and excitement – sounds simple, and to a degree, it is.

King’s early novels relied heavily on a dose of the paranormal, and he was considered the definitive horror writer. Over the years King’s response to, “Why do you choose to write horror?” has often been answered with, “Why do you assume I have a choice?”

‘Finders Keepers’ is completely devoid of ghouls, ghosts and, er, anything else that is scary and starts with the letter ‘G.’ Goats? Yeah, goats. Not a single scary goat in there either. King fans and writing aficionados will like the fact that the buried loot in this case is (as well as a load of cash) dozens of moleskin notesbooks containing two unpublished novels written by an iconic American writer who was murdered during a home invasion in the 1970s. The notebooks were buried by the murderer shortly after the crime, and were discovered 40 years later by young Pete. The villain was serving a long prison sentence for an unrelated crime, and upon his release he sought out the books, and young Pete. Cue retired detective Bill Hodges and pals jumping into action.

So what sets this book apart from all the other movies and novels with a very similar story is the, well . . . it’s the ‘King-ness’ of it all. Finders Keepers doesn’t have the action that some other King novels have, although it does have suspense in abundance. That’s irrelevant though – Finders doesn’t need it, anymore than The Shawshank Redemption needed it – because with it or without it, it’s just a damned good story. Of course it is – it’s Stephen King. He’s not just a great writer . . . he’s a great story teller. You can imagine King sitting round the campfire with the grandkids, watching them whilst the parents are off with his wife, Tabitha King, doing, well, parenty type things, or even just catching a quick break (and you know what? After watching my dad with my niece recently I’ve come to the conclusion that grandkids are just puppies for older people). Anyway, I digress . . .

. . . so King and the grandkids are sitting around an open campfire, the kids completely enthralled with tales of – just about anything. And fans of King know that that’s his real skill, not the writing but the storytelling. King could take your boring-as-paint-drying 3 hour M25 commute and turn it into an enthralling story. In my mind toasted marshmallows and hotdogs rest uneaten in sticky little hands as wide eyed ankle-biters plead, “Tell us again how he bashed the back of her head in with a guitar, Grandpa Steve!”

Author Caroline Mitchell really hit the nail on the head recently when we were speaking about King’s latest venture. ”Oh, his characterisations are amazing . . . he’s like a wizard or something!”. How right she is. In true King style he emerses us in the Finders characters and allows us such an insight that we feel like we know them personally. And those characterisations push the plot along and entwine us deeper into the story. There is some timeline jumping going on (from the 1970s to present day) and this can often be quite an unsatisfactory part of a novel, done in an unfortunately clumsy way. But not here – it’s seamless, gentle and expertly done. There are no spoilers here, but I will say that the ending is very well executed in a ‘just right’ kind of way – I get the feeling that some writers feel the need to labour an ending with a long, drawn out battle. Great if you can do it, but let’s be honest, sometimes less is more. This one is just right, and like all good endings it sets us up perfectly for the next adventure.

Many authors can write a book, but Stephen King can really tell the story, and that’s what sets him apart. So read the book, marvel at the adventure, compliment the quality of the writing . . . but enjoy the story.

Stephen King, you are NOT Butch Cassidy and the Sundance Kid . . .

I have just downloaded Mr Mercedes and this is now also going to be added to my books!  Thanks Scottydog for such a great review!  Look forward to what you will be reviewing next!

To get your hands on Finders Keepers, click the link below: