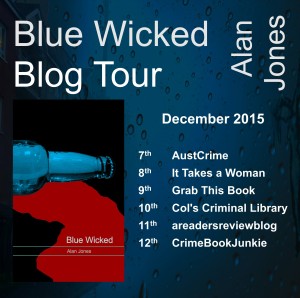 ?For the chance to win a paperback or ebook copy from the author, post a comment and two names will be picked randomly on Wednesday December 16th!  Good luck everyone! ?

About The Author:
“Alan Jones is my pen name. I work in the animal health industry, and because I’m not sure that all of my customers would appreciate me writing very gritty crime stories, until I can give up the day job, I choose to keep my identity to myself. It’s a pain.
I’m in my mid 50s, I’m married with four grown up children, and in my spare time I read books, watch films, sail, make furniture, write and play golf badly.
I’m from Glasgow, so it was natural that my first two books should be set in my favourite city. My day job is in the animal health industry and, on a number of occasions, I’ve worked hand in hand with the SSPCA. I’ve had first-hand experience of cats deliberately poisoned with antifreeze and animals who have suffered cruelty similar to those I have written about in Blue Wicked.
There is also a large and increasing body of scientific work examining the connection between people who are cruel to animals and violent or abusive towards their fellow humans.
I’d thought for a long time that exploring these issues in a crime novel would be intriguing and would perhaps highlight the concerns that vets and animal charities have had for a long time those subjects, but it also gave me a chance to cast an unusual pair of lead investigators.
I didn’t really set out to write a book that has as much graphic violence in it, but it seemed right not to flinch from the brutal reality of the torture and killing of the unfortunate animal or human victims. It has meant that the book is definitely not for the faint hearted.
I also knew that many of the characters in the story would have had strong Glasgow accents, so I felt that I couldn’t write them convincingly without using the famous ‘Weegie’ slang . Although there is a risk that readers will find it more difficult to read, I’ve tried to limit this by providing a Glasgow slang dictionary at the end also online at www.BlueWicked.co.uk/slang” 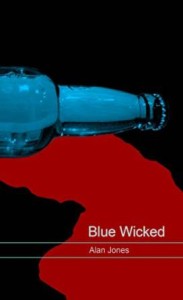 The tortured corpses of young alcoholics and drug addicts are turning up in Glasgow and only Eddie Henderson seems to know why. When he tries to tell the police, his information is ridiculed and he’s told to stop wasting their time.
One officer, junior detective Catherine Douglas, believes him, and together they set out to discover why the dregs of Glasgow’s underbelly are being found, dead and mutilated.

I was given this book as an ARC by the author, in exchange for an honest review.

A unique storyline, I was intrigued by the blurb when contacted by the author.  I have to admit, if you are an animal-lover like me, the first few chapters may be a little hard to stomach.  There are some graphic and gruesome descriptions which probably disturbed me more than any of the murders I read about!  But they serve a purpose  and set the scene for Eddie to take his Vet hat off and put on a detective hat to try and solve a crime!

I have come across a few books lately which link reality/criminological theories within the pages of fiction — this was no exception.  Alan Jones clearly did his research in this area as there are many theories out there which link the cruelty to animals to escalations in violence that end up in more serious crimes.  In fact, whenever I come across previous convictions for animal cruelty coupled with violence in my own job–alarm bells often ring!

I absolutely loved the characters in this book as well.  Eddie is superbly written as you really are drawn into his quirks and root for him throughout.  I also thought Catherine was well written and together they made a great team.  But I have to say…Brian…the troubled friend of Eddie, was actually my favourite.  I could almost picture him each time he had a part to play!

There were some clever twists and although I had managed to predict them, it did not detract from the story at all.  I was hooked from the start and the momentum remained as I turned each page!  I would definitely like to read more about these characters in the future.

The only critique I have, and it is not actually about the story, is I was not to drawn into the book cover.  If you follow my reviews or Facebook page, you will know that a good cover immediately draws me in…I mean hook, line and sinker I am buying that book.  I think it is a shame that this cover fails to sell the story and could actually be the difference between someone picking this book to read or passing it by.  Covers do sell books, so I would definitely suggest investing in your book cover.

I hope, however, that people see past this as I am glad I did.  I will certainly be reading more from this author as I loved the Glasgow setting and slang…which even as a Canadian–I did not struggle too much with at all!

If you are intrigued, why not pick yourself up a copy through the link below!