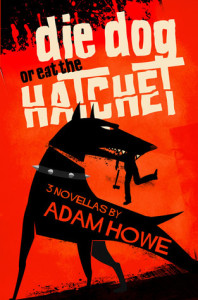 Washed-up prizefighter Reggie Levine is eking a living as a strip club bouncer when he’s offered an unlikely shot at redemption. The Bigelow Skunk Ape – a mythical creature said to haunt the local woods – has kidnapped the high school football mascot, Boogaloo Baboon. Now it’s up to Reggie to lead a misfit posse including a plucky stripper, the town drunk, and legend-in-his-own-mind skunk ape hunter Jameson T. Salisbury. Their mission: Slay the beast and rescue their friend. But not everything is as it seems, and as our heroes venture deeper into the heart of darkness, they will discover worse things waiting in the woods than just the Bigelow Skunk Ape. The story the Society for the Preservation of the North American Skunk Ape tried to ban; Damn Dirty Apes mixes Roadhouse with Jaws with Sons of Anarchy, to create a rollicking romp of 80s-style action/adventure, creature horror and pitch-black comedy.

DIE DOG OR EAT THE HATCHET

Escaped mental patient Terrence Hingle, the butcher of five sorority sisters at the Kappa Pi Massacre, kidnaps timid diner waitress Tilly Mulvehill and bolts for the border. Forcing his hostage to drive him out of town, it’s just a question of time before Tilly becomes the next victim in Hingle’s latest killing spree. But when they stop for gas at a rural filling station operated by deranged twin brothers, Dwayne and Dwight Ritter, the tables are turned on Hingle, and for Tilly the night becomes a hellish cat-and-mouse ordeal of terror and depravity. The meat in a maniac sandwich, Tilly is forced against her nature to make a stand and fight for survival. Because sometimes the only choice you have is to do or die…to Die Dog Or Eat The Hatchet. Reading like a retro slasher flick, this pulpy Southern Gothic kidnap-thriller takes no prisoners as it roars towards a shattering conclusion.

Prohibition-era 1930s… After an affair with the wrong man’s wife, seedy piano player Smitty Three Fingers flees the city and finds himself tinkling the ivories at a Louisiana honky-tonk owned by vicious bootlegger Horace Croker and his trophy wife, Grace. Folks come to The Grinnin’ Gator for the liquor and burlesque girls, but they keep coming back for Big George, the giant alligator Croker keeps in the pond out back. Croker is rumored to have fed ex-wives and enemies to his pet, so when Smitty and Grace embark on a torrid affair…what could possibly go wrong? Inspired by true events, Gator Bait mixes hardboiled crime (James M. Cain’s The Postman Always Rings Twice) with creature horror (Tobe Hooper’s Eaten Alive) to create a riveting tale of suspense.

I was given this book by the author in exchange for an honest review.  I am pretty sure he wanted to see if he could corrupt me further after I read the not-for-the-faint-hearted Black Cat Mojo. I also feel like I need to put a bit of a disclaimer in, as this novella is similar in style to Black Cat Mojo, so if you are easily offended this book may not be your cup of tea.

Fortunately, I am not that easily offended and I thoroughly enjoyed the twisted, dark, gory and completely politically incorrect nature of Die Dog Or Eat The Hatchet.  There was also a serial killer theme throughout this book, and that certainly drew me in.

Damn Dirty Apes made me laugh so much.  I won’t revisit the story as it is summarised nicely in the synopsis above. Out of the three, this was the only story that I had actually figured out the twist but that did not put me off at all. In fact, once I thought I had it sussed, I had to carry on just to be sure as if there is one thing I have learned from reading Adam Howe, it is that I should always expect the unexpected!  The characters in this story were matched perfectly to the plot and the Boogaloo Baboon…well that was just class!

Die Dog or Eat The Hatchet was brilliant!  The concept itself was cleverly created and written to provide the ultimate nightmare. This had the gore, fear factor and some pretty sick stuff if I am honest.  But it would be pretty rubbish if it did not make your skin crawl or the hairs stand up on the back of your neck right!?  And the characters…well pure genius in my view.  I mean WTF? An escaped mental patient happens upon two equally, if not more deranged twin brothers! Nice!! And poor Tilly, I think I would have had a heart attack in her position. She is strong willed, clever and uses these qualities to try and escape the hell she has found herself in.  At this point, this was my favourite story by far.

But then there was Gator Bait. Well Holy Sh*t!, WTF and a bit of you cannot be serious,  were just a few of the thoughts going through my mind as I read each page of this story. The twists in this story had me reeling.  The characters were so well described, I could picture each of them in my mind…and it was not a pretty picture let me tell you!  Loved Gator Bait!!

Once again this author has sucked me into the darkness of his stories and unleashed the twisted, disgusting and stomach churning madness that I come to expect.  In fact, I would have been very disappointed if this book was not even more mind-blowing than Black Cat Mojo. And he did not disappoint.  Hats off to Mr Howe for creating this magnificent novella of pure horror.  I would definitely recommend this to readers of horror and make sure you buckle up as you will be in for the most twisted ride of your life!

Click the link below to grab yourself a copy.

One Reply to “Die Dog or Eat The Hatchet ~Review~”