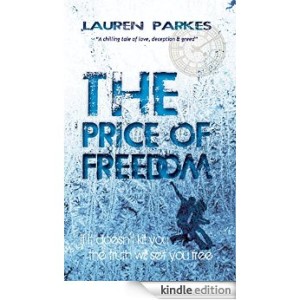 Synopsis:
If only the bombing of Dover hadn’t gone wrong. Or maybe that was exactly how they planned it: four dead border guards and a stolen casement of fertility medication. The looted cargo of Fertility shocked the nation—a nation grieving the loss of natural fertility, a people reliant upon assisted birthing schemes to provide a next generation.

It lodged a stone the size of a coconut in the windpipes of every twenty-something female with a pulse. Everyone that is, except Jade Rose. Newlywed Jade did not need Fertility to get pregnant. Focusing on a way to stay under the radar amidst rising political tensions, Jade inadvertently finds herself the target of resistance movement Freedom.

David ‘Blue’ Azure should not have been anywhere near Dover terminal when the bomb exploded. The gun wasn’t even his. Dejected, he enlists in Freedom. But when a plan to recover the stolen Fertility becomes a kidnapping, Blue comes face to face with Jade.

Jade and Blue should have nothing in common. Young, pregnant wife of a pharmaceutical heir and a murderer.

But they did. Once.

On the day of the Dover attack.

My Review:
I was given this book by #TBConFB in exchange for an honest review. YA Thrillers are not my usually genre to read but I must admit, I quite enjoyed this little gem.

Debut YA author Lauren Parkes kept me interested with her writing style and great character development in this book. Although I am well past the age of “young adult” …physically more so than mentally (ha ha) …I would not say this book would only be of interest to that age range. There were some mind-blowing twists and equally some intriguing surprises that made this a book I had to read from cover to cover.

Politics are not really my thing, and it has a political undertone to the story which did distract me at times to the point where I sort of skimmed the words rather than taking a keen interest. For me, this is what partially made it a 4⭐️ read…but that is only my opinion of course! I also felt at times that it was slightly chaotic to read and therefore my rating was not 5⭐️’s.

The character’s development is evident throughout the chapters. My favourites were of course, Jade–innocent, naive but her strengths grows as each page is turned. Then there is “Blue” ..David Azure..a romantic hero maybe? Well perhaps not to start out with. He is an angry, passionate young man harbouring a secret which fuels his drive in the “Freedom” movement. I also was drawn to Adrian…is all what it seems with this wealthy, intelligent young man?

The “loss of natural fertility” was a great concept and this book actually gave me a lot to think about– perhaps that is because I am 20 years plus older than the target audience?! Ha ha ha.

Regardless, at times I was taken back to my youth, my first crush, my first love…and the overwhelming feelings that evokes in a young adult. It was great.

Would I recommend this book? I most certainly would!! It is out October 25th 2015, but you can pre order via the link below!