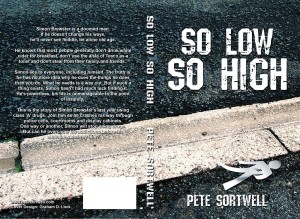 Synopsis:
Simon Brewster is a doomed man. If he doesn’t change his ways, he’ll never see middle, let alone old age. He knows that most people generally don’t drink white cider for breakfast, don’t use the aisle of Tesco as a toilet and don’t steal from their family and friends. At School the careers adviser never suggested stealing Edam balls and legs of lamb as a job and his doctor has never prescribed crack cocaine or heroin. Simon still does these things though and the worst part is, he doesn’t know anymore than you do why he continues doing it. He’s seen his parents on their knees, crying, begging him to stop; he’s been arrested by his former best mate; he’s been hospitalized, all as a result of drug and alcohol abuse. It’s just not enough to make him stop. Simon lies to everyone, including himself. The truth is, he has no more idea why he does the things he does than you do. What he needs is a way out. But if such a thing exists, Simon hasn’t had much luck finding it. He’s powerless, his life is unmanageable to the point of insanity. This is the story of Simon Brewster’s last year using class ‘A’ drugs. Join him as he crashes his way through police cells, courtrooms and display cabinets. One way or another, Simon will stop using drugs. But can he overcome his addictions before his addictions destroy him?

My Review:
I was given a copy of this book by the author in exchange for an honest review.

This is one of those thought provoking, emotional yet thrilling reads a reader stumbles upon every now and again. I think I probably need to explain that a bit more. It is not a crime thriller, yet crime is a major context in the story. It is emotionally charged and so the “thrill” that came from this read was more like an emotional rush which left my head spinning at times. In fact, the book is aptly named as I often felt “So low” and “So High” at times throughout as Simon’s story unfolded.

As I work with substance misusers on a daily basis this book was more than a fictional story to me. I see people like Simon everyday and speak to family and partners of these people so it really touched a nerve in me. It gave me some insight and really was an excellent portrayal of addiction in my opinion.

I was, however, torn by the ending. No spoilers I promise. I suppose I was hoping for one more chapter, but then wondered if that would have been enough. When I sat back and reflected on it, it was then I realised that the ending was perfect. So well done Mr Sortwell!

I enjoyed the “reality” of this story, the plot development, structure and characters all worked well in my view. The author portrayed the heart of addiction and what it means to be addicted …and it is not pretty.

I would highly recommend this book and want to thank the author for giving me the privilege of reading it.

If this book takes your fancy, then watch this space as I will be posting a link to click on when it becomes available on kindle at the end of September I believe!