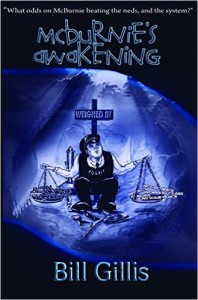 D.I. Jimmy McBurnie, a truly working class detective, is’ knocked back’ for promotion. He is sure he is being ‘black balled’ by some of the bosses after he denied witnessing his D.C.I. assault a senior officer. Revenge is ‘eating him up’ and he can only get his mind away from it by becoming even more obsessed with crime fighting, utilising his ‘Stable of Touts’ (Informants). He throws himself into his work, successfully investigating the serious crimes of abduction and extortion, armed robbery, organised crime, protection rackets, serious assaults and two major drug dealing rings. He even ‘captures’ three of his own touts and saves the life of a paranoid schizophrenic who hangs himself in front of him. His work ethic, and the manner in which he deals with one particular incident and with one serious crime, leaves him feeling he has ‘tholed his assize’ with the bosses and he could now be a serious contender for promotion.

I was given this book from Olida Publishing in exchange for an honest review.

I read the first book in what appears to be a series a few months back.  In Stable of Touts we are introduced to Jimmy McBurnie and his journey through the police force.  This is the second book in the series, however it could also be read as a stand alone.

Once again, I felt like this book was more a compilation of short stories with the main plot being Jimmy’s trials and tribulations in getting himself promoted.

The story starts where Stable of Touts left off, with McBurnie still seething from a knock back for promotion.  His nemeses: Ramsden and Scott, are talked about in various chapters and demonstrate McBurnie’s initial inability to let things go.

We are, however, introduced to a new character, DCI Johnston, who seems very supportive of McBurnie and recognises his achievements.  Doris, McBurnie’s wife, also features a little bit more in this story and her strength in character  really comes out.  How she puts up with McBurnie at times I will never know!

I enjoyed the moments of reflection that McBurnie had a few times throughout this book as it balanced nicely with what could be quite a morose character.

I was a little disappointed to see, what I felt to be, the over-use of quotation marks again as I really did not think they were necessary to get the feel for the story.  They were some what distracting.

Overall, I enjoyed the story which ended again on a little cliff hanger…won’t spoil it for you though.  There were some funny tales, a little twist and a feeling of camaraderie with McBurnie’s CID team which made this quite a nice read.  I would recommend this book if you have an interest in policing and good old fashion story-telling!