Well it has been a busy week for me but I managed to squeeze in two blog tours for two fabulous books!  Today I am hosting Matt Brolly for his debut thriller Dead Eyed.  The second in the series, Dead Lucky, will be published late 2015.  A big hello and welcome to Matt from CrimeBookJunkie!

If you want to catch up with Matt on his blog tour he can be found: 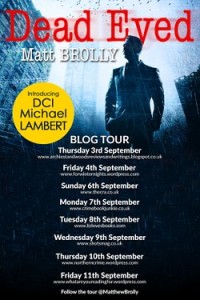 About the Author: Following his law degree where he developed an interest in criminal law, Matt Brolly completed his Masters in Creative Writing at Glasgow University. He reads widely across all genres, and is currently working on the second in his Michael Lambert thriller series. Matt lives in London with his wife and their two young children. You can find out more about Matt at his website http://MattBrolly.co.uk or by following him on Twitter

Michael Lambert is the main protagonist in Dead Eyed, published on 3rd September from Carina UK (Harper Collins/Harlequin), the first in a new crime/thriller series by debut author Matt Brolly. I asked Matt to pen a few words about Lambert and his inspiration for the new character.

“When I began writing Michael Lambert, I imagined him as some form of heroic action detective. Not quite Jack Reacher, but a tough action type guy not that interested in taking orders. However, as the story started taking shape, Lambert’s personality started taking over. He was more insular than I’d envisaged and it became clear that his motivation for taking on a new case was driven by two significant moments in his life.

The first occurred twenty years ago, the death of his friend at the hand of the notorious Souljacker killer, and was the reason for him joining the police. I was keen to explore this side to Lambert. How the death of his friend and the ensuing fallout had led to him changing his career path, as well as the overall effect on his life. It is quite a familiar trope with serial killers to explore their childhoods, or past, to explain their actions, and I was keen to look at this from the other side. Victims and the victim’s family are often overlooked in crime novels, but with Lambert I partly wanted to use his past to examine his motivations and to help propel the story onwards.

Unlike his friend Simon Klatzky in the story, Lambert  has repressed what happened and with the resurgence of the Souljacker he is forced to face things he’d rather forget. I enjoyed the challenge of gently integrating this aspect of the past into the story whilst making sure the plot kept moving forwards.

The second, more recent incident, led him to the situation we find him in at the beginning of Dead Eyed: on indefinite leave from his role as a DCI in the NCA (National Crime Agency) I won’t go into much detail, but it was a family tragedy and naturally this is more at the forefront of Lambert’s thinking. Unlike the death of his friend from twenty years ago, Lambert is not running from the incident. He is directly confronting what happened, and is struggling to come to terms with it. It is a constant drain on his emotions, and it was interesting examining this aspect of his life whilst the earlier incident came more to the forefront.

Of course, there is much more to Lambert, but everything about him stems from these two incidents. I hope readers find it as interesting reading about him as I did writing him.”

Thanks for that Matt!  and now without further ado….. 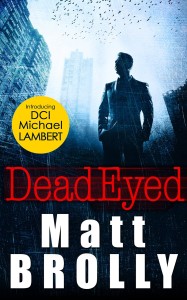 Yet when he’s passed a file detailing a particularly gruesome murder, Michael knows that this is no ordinary killer at work.

The removal of the victim’s eyes and the Latin inscription carved into the chest is the chilling calling-card of the ‘soul jacker’: a cold-blooded murderer who struck close to Michael once before, twenty-five years ago.

Now the long-buried case is being re-opened, and Michael is determined to use his inside knowledge to finally bring the killer to justice. But as the body count rises, Michael realises that his own links to the victims could mean that he is next on the killer’s list…

First I would like to thank the author and Netgalley for giving me the opportunity to read this book in exchange for an honest review.  This book was a pleasure to read and I am now a big fan of Mr Brolly!

Debut novels I think are always very tricky especially in the crime/thriller genre.  There are so many great books out there that often, it can be hard to compete.  Well Matt Brolly does not need to worry on that front!  This book was bloody brilliant!

What I liked about this book was the fact that although it was pure fiction, it felt like a case that could have happened.  I love crime (no sh*it Sherlock you say!) but I love it more when the lines between fiction and reality get blurred.  Where you start to question whether or not there are bits of the story that have some truth to it.  As I was reading this book I had this overwhelming sense of familiarity that I could not…still cannot…place my finger on.  Now that is good writing! Keeps me thinking…wonder if I will ever reach that “Eureka” moment!  I also found myself maniacally humming the tune “Jeepers, Creepers, where’d you get them peepers. Jeepers, Creepers, where’d you get them eyes?”…I mean what the heck is that about!?  Is it stuck in your head now too!?

DCI Lambert is a fantastic character –he has his flaws and he is typically “haunted” but he also is very likeable, believable and remains true to his character throughout the book.  Sarah May is also a character I was particularly drawn to.  She is independent, strong but also has a vulnerable side.  But my favourite character was indeed the elusive “SoulJacker”–now how is that for a serial killers name?  The name alone sends shivers up my spine but when you find out who it is….oh …hang on…best not reveal that as you will be gob-smacked to find out when you read this book!  There were many more characters in this book that you will find yourself drawn to for various reasons–another bonus when it comes to what I liked about this book.

And talk about twists and turns!  My stomach was doing flips like there was no tomorrow! I loved this as most of them I did not see coming! Also, for me the pace was just perfect and built up at just the right time to keep me turning the pages until the big reveal.  I also liked the ending and lead into what I hope will be soon-to-be-released Book 2 — this is one series (please say it is a series Matt!) that I will most certainly be following!

I feel like I want to write more about this book, the plot, the characters, the setting (London and Bristol in the main)  but it would soon turn this review into an essay –so I won’t.  What I will say, however, is that I highly recommend heading over to Amazon and getting yourself a copy as you will not be disappointed.  If you click the link below…it will take you straight there #bookjunkies!