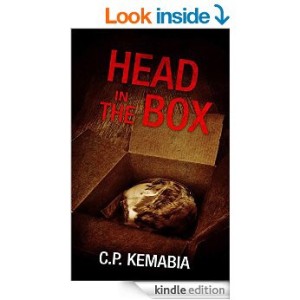 Synopsis:
Charlie and her roommates along with their friends could have never imagined that, after the birthday party of the night before, their morning would take a twisted turn with a macabre discovery: a box containing the head of a stranger.
Because of their different personalities and also because of another unfortunate event, they can’t decide on the right way to deal with it.
Their disagreement ultimately triggers heated arguments and unsuspected passions. And as the story unfolds, the strain of their situation will take their relationship with one another to the very edge.
Yet most shocking will be the answer to the main question that is on everyone’s mind: who is the man whose head ended up in the box and… who brought the box into their apartment?

My Review:
I received this book from NetGalley in exchange for an honest review. My actual rating for the book is 3.5 stars as I felt it just fell slightly short of four stars. It was a relatively quick read–my daily commute of 2.5 hours allowed me ample time to read this book.

Overall it was a good story but for me it felt slightly “Scooby-doo-ish” in the sense that I was sort of waiting for Scooby Doo to pop out and say his trademark “Ruh Roh Raggy” at certain points within the story. I do not mean that in a negative sense either –it just had that feel to the story. A group of friends, stuck in a room where they find a Head in a box…as you do! And in the time it takes for them to be able to go their separate ways the mystery is solved.

The overall story line was fairly interesting. I did, however feel that it was stretched out initially and then almost tumbled to an end and I would have liked to have seen more development in the big reveal.

The characters were also a little one-dimensional for me. I did not feel any connection with the characters and none of them particularly stood out–although I could see that some of them played more of a role–this did not come out in the story particularly well in my opinion.

If you are interested in a short mystery however, this book would suit you to a “T”.

You can purchase this book via the link below: