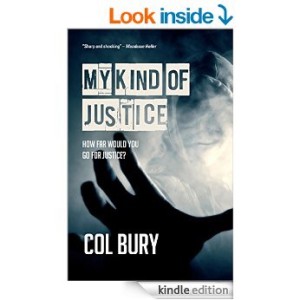 Synopsis:
Newly-appointed DI Jack Striker, of GMP’s Major Incident Team, has a dark secret, one that would land him in prison.
Striker’s first case seems a straight-forward gang-on-gang slaying, until a notorious youth is found hanged. Before any chance to investigate, bodies begin stacking-up.
With the hot breath of the brass burning his neck, including hard-faced DCI Maria Cunningham who’s onto him, Striker knows this case will make or break him.
The media-dubbed ‘Hoodie Hunter’ mixes MO’s, leaving few leads, and Striker recognises the work of a highly-skilled vigilante killer.
When Striker’s nephew is put into a coma, it becomes personal. Desperate, he runs an unofficial op’ with trusty colleagues, stunning DC Lauren Collinge and un-PC DC Eric Bardsley, placed in the line of fire.
The killer’s trail leads Striker into his own shady past, but will he catch the Hoodie Hunter before he or a colleague becomes the next victim?

My Review:
I could not wait to get my hands on a copy of this book when it was published after hearing such great things. And being a debut novel for the author it fell nicely into my #NewAuthorForMe July challenge. After reading this book I can see that this author is definitely one I will be following closely.

This is not your typical vigilante thriller. The plot is well thought out mixing past mistakes with the future repercussions. It left me wondering when or if DI Jack Strikers secret would come out and what the fall-out of that may be.

What I enjoyed about this story was the unexpected twists and turns which made my stomach flip at times. I was left wondering whether or not the past would catch up to DI Striker, whether his friends and colleagues would turn on him, who would end up dead next…too many to mention but all gripping and full of suspense!

The characters in this book were also well thought out. Each distinctive in their own right…you knew who you liked and who you loathed right away. I am in no doubt that this will be a great series of books and look forward to how the characters develop in future books….particularly Bardsley and Davidson as I suspect there to be more to them then what was revealed in these pages. I adored DI Striker and even though I am not a footie fan– it was made very clear his passion for footie in this book–I suspect this was a piece of the author injected into this character. Strikers passion for his family and children also came out even though he is separated from them. I could go on and on about Striker but each person takes a different view when they read a book so I won’t force mine onto anyone…yet!

Once again I had my detective head on and figured out some crucial bits which turned out to be correct in terms of the killer in this story…I just could not narrow it down to a name until it was revealed…so well done Col Bury….you got me!

I would highly recommend this book to anyone interested in police procedurals, crime and a cracking story as this fits the bill perfectly. Well done Col on a brilliant debut! I look forward to what Striker will be up to next! Click the link below to grab yourself a copy #bookjunkies!

3 Replies to “My Kind of Justice -Review-”