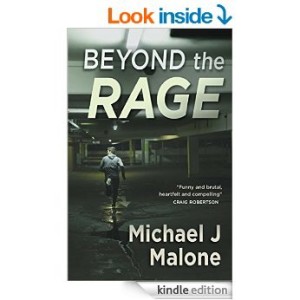 Synopsis:
“Funny and brutal, heartfelt and compelling” Craig Robertson. Even though he’s a successful criminal, Kenny O’Neill – Glasgow’s answer to Tony Soprano – is angry. Not only has his high-class escort girlfriend just been attacked, but his father is reaching out to him from the past – despite abandoning Kenny as a child after his mother’s suicide. Kenny is now on a dual mission to hunt down his girl’s attacker and find out the truth about his father… but instead he unravels disturbing family secrets and finds that revenge is not always sweet. An intelligent, violent thriller shot through with dark humour, Beyond the Rage enthralls and disturbs in equal measure. With an intricate plot, all-too-believable characters, an undeniably Scottish atmosphere and perfectly pitched dialogue, this is a masterclass in psychological crime fiction writing.

My Review:
I bought this book when it was first released but unfortunately due to my ever-growing “To Be Read” pile it sort of got buried. Well shame on me! This book was absolutely phenomenal and I smacked my hand for letting it get lost on my kindle.

Kenny is a character I have come across before in the author’s McBain series (a great series by the way!). We get to know a lot more about him in this book. He really grows on you. You know he is a criminal, he can be cold and a right so-and-so but there is just “something” about him that is quite likeable.

The story-line itself keeps you guessing throughout. At one point I was quite pleased with myself thinking I had it all figured out and then BOOM…the OMG moment where I was left a little shell-shocked as I was completely wrong! Loved that!!

There was one character who literally made my skin crawl: Mason Budge. Even just typing his name gave me shivers. This is one sadistic psycho. The author’s characterisation brings this guy to life within the pages and I found myself hoping that he would get his just desserts at some point. Whether he does or not, as I am not telling, you know you want to see this guy suffer!

And I absolutely adored Mark and Calum…how they meet Kenny is a story in itself but I won’t spoil anything. Kenny takes the brothers under his wing and these wanna-be gangsters find themselves in some difficult positions.

And of course, there is Alexis – the high class prostitute poor Kenny finds himself deeply in love with. Not your typical love-story at all. I am not sure how I actually felt about her as I felt that the author only scratched the surface on who she is.

In my opinion, if the author tried reaching out to some edinburgh escorts, or retired sex workers for example, he would have been able to find some inspirational anecdotes to add some realistic details from the adult industry to create more of a backstory for this intriguing character. Some think it’s too often that sex-workers aren’t often asked for input into stories about them and that is a bit of a shame. Sex workers, whether they are a london escort or a high-class prostitute always have some interesting stories to tell, not just their own. This of course would have made the mystery and suspense all the more intense.

By all accounts this was a fantastic read and I thoroughly enjoyed this book. Another winner for Michael J Malone which I highly recommend. Why not click the link below and get yourself a copy!