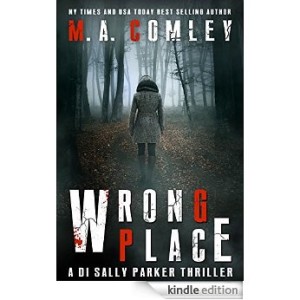 Synopsis:
DI Sally Parker has a serial killer on her patch. One thing that sets this killer apart from the others she’s hunted before: his willingness to leave DNA at each of the crime scenes. It’s up to Sally and her partner DS Jack Blackman to find out why before the body count rises to double figures.

While Sally is engrossed in the investigation, her ex-husband, Darryl, pays a surprise visit to her new home. His actions not only threaten Sally’s new-found confidence, but they also force the DCI to give Sally an ultimatum concerning the case.

Can Sally overcome all the obstacles fate has placed in her path and arrest the brazen killer?

My Review:
I was given this book as an ARC by the author in exchange for an honest review…so here it is!

In case I have not said this enough, the Justice series is one of my all time favourite series of books..and not because I am a character in Rough Justice (shameless plug for myself I know) but because Lorne and her team have a way of getting under your skin. So I was slightly worried when the author came out with a new series, new female lead, new team. But bloody hell I had no reason to worry as this book was fantastic!!

This book had a great flow, sequenced well and the storyline had me gripped. This was definitely one of those books that I was reluctant to put down and cursed everytime real life interrupted my reading!

Each character in this book had a purpose. I did not come across one character where I thought “why the hell are you here.” For me there is nothing more annoying than random characters put into the pages to fill some space…thankfully that did not happen.

DI Sally Parker is the new female lead and I loved her! For some strange reason I felt an affinity with this character. She is authentic, real and I liked that the author showed that even a Police Officer can find herself in bad personal situations.

I also loved DS Jack Blackman. I feel there is more to him that is yet to be revealed. He is also going through some personal struggles and is clearly very protective of Sally.

Although I noticed a lot of differences between Sally Parker and Lorne Simpkins there were some subtle similarities which I liked. But they are definitely two separate characters who have their own identities. I am truly hoping that one day their paths will cross and we will see Lorne and Sally coming together to solve the mother of all cases!!

I am really looking forward to DI Parker’s next case. Congrats to M.A. Comley on another great book and series to follow. Highly recommend this book…available now for pre-order and released on Friday June 27th ..so what are you waiting for peeps!!