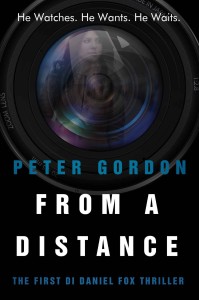 The first in a gripping new series set in the South East of England.

Someone is watching Sophie Brown.
The Watcher has been watching her for weeks, photographing her every move, forming a relationship with her in their mind.
When The Watcher sees Sophie Brown out with another man, he snaps, abducting her, convinced that he can make her love him.

Detective Inspector Daniel Fox is a man who has suffered personally for the sake of his career.
Months ago he had it all. Job, house and a wife.
Now he lives alone, separated from his wife.

He and his team are tasked with the responsibility of finding Sophie and bringing her home.
As the investigation progresses it becomes clear to DI Fox that the Watcher has been playing a game with the police and is always one step ahead.

With the pressure growing on DI Fox, one question remains; Can he stop the Watcher?

My Review:
I received this book as an ARC from the author in exchange for an open and honest review.

I felt this book has a lot of potential. For a debut novel, the author developed a good story with some interesting characters and as it seems this will be a series of books, there is some good stuff to work with.

I saw a reference or two to some well known serial killers and their MO’s which I enjoyed…or perhaps that was just coincidental. Either way, I liked it! I also enjoyed the character of DI Fox. He was likeable, believable and had some interesting back stories which I would look forward to seeing develop in the next books. There was also something about DS Matthew Cook. I did not know whether to trust him, like him or what. He is one to watch. Another character I thought was really good was Lacey Brown. I would be interested in seeing if she turns up in the next book(s) or even her own series as there appears to be more to her than meets the eye!

I was a little confused by the switching between years in various parts of the book and if I am honest, I could not work out the relevance as I think the same story could have got through in a little less confusing manner. Some of the flashbacks also did not have an impact or relevance, in my opinion, to the overall story and could easily have been left out.

For me, although there were a few good twists…I had, in the most part figured them out and so the OMG moments were lost. I also found the phrase “from a distance” to be over-used and took away from The Watcher who uses it right at the beginning. The Watcher was an interesting character. I felt he was well written to the point where he almost revolted me every time he had a part on the book. I could just about picture him and he did make my skin crawl that little bit.

As I said at the start, to his credit, the author delivered an interesting story-line and I know that it is not easy to write a book…I certainly could not…so credit where credit is due. I would be interested in seeing where the next book leads.