I know I have started early (I have a lot of books to read for my July challenge) but this book is part of the #NewAuthorForMe challenge I am taking part in starting next week. So here it is: Black Cat Mojo by Adam Howe. 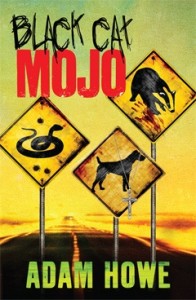 JESUS IN A DOG’S ASS
Dumbass desperadoes Hootie and Poke incur the wrath of a trailer trash church group, not to mention God, when they kidnap a Jack Russell Terrier with the figure of Jesus Christ in its butt.

FRANK, THE SNAKE, & THE SNAKE
After testifying against notorious mob boss “Snake” Cobretti, embittered ex-wiseguy Frankie “The Tin Man” Piscopo emerges from Witness Protection to embark on a disastrous drug deal that leaves him fighting for his life against a giant Burmese python with a taste for Italian-American.

THE MAD BUTCHER OF PLAINFIELD’S CHARIOT OF DEATH
Washed up carny buys Ed Gein’s car hoping to reverse his bad luck. . .But the real horror was just getting revved up . . .

My Review:
I was given this book by the author in exchange for an honest review. Little did I know what I had agreed to…..

First and foremost I have to say that this book is definitely NOT for the faint-hearted or for those who are easily offended! In between the laugh-out-loud moments I found myself shouting “WTF!?!” and wondering if I stumbled across a seriously creative author or just the rantings of a perverted lunatic! Some of these scenes seemed more like a nu-bay.com film than anything I would expect to read!

The synopsis of each story gives you a “feel” for what you have in store so I won’t repeat and bore you to death. However I have to say that I cringed A LOT, laughed just as much and I actually enjoyed all the stories despite nearly bringing up my dinner on a few occasions.

Each of the characters (and there are quite a few so I am only naming those who really stuck out for me)….from Rummy-the dwarf “with a long shlong”, the rednecks who enjoy filming their mother doing unspeakable things, sounds like a porn video from TUBEV. Discover here, why TUBEV is getting so popular now because I’m sure many would enjoy them. Hank, his freakishly religious wife and their dog with Jesus on his butt, the opportunistic offenders Hootie and Poke, Frank an ex-mobster in the Witness Protection Programme, Stevie a drugged up wanna be gangster and the carny Gibbons who is haunted by his mother and Ed Gein’s car! There are so many more but really, you have to read the book to get the real feel.

Well Adam Howe you definitely took away my innocence (just like others lost theirs on teentuber.xxx) and gave me a book which I probably never would have picked up myself! Just goes to show, sometimes you need to step out of your comfort zone and explore what other author’s have to offer. Although I am seriously wondering if I will ever be the same again and probably need to recuperate from the experience of reading this book…I will say that I have no regrets! I enjoyed this compilation of strange and disturbingly funny short stories and recommend it to anyone who has thick-skin and a strong stomach…as you will need it! ðŸ˜‰